The price you pay: Calgary breaks out service costs per person in its latest budget

Four one-hundredths of a cent.

That’s how much the city figures it costs to deliver a single glass of water to your kitchen sink.

While you don’t pay a toll to drive on the roads, the average vehicle trip is worth 20 cents.

They’re all numbers broken out and provided in the city’s latest budget – a document that was approved by Calgary City Council on Friday.

Of course you don’t get a bill for $404 each year from the Calgary Police Service, but that’s how much the service costs Calgarians when its budget is divided evenly between every man woman and child in the city, according to Carla Male, the city’s acting chief financial officer.

“The calculation of the service – whatever that service is – we’re trying to give an indication of what that tax value is.”

For the first time, the city delivered its budget based on service, rather than department. While the service is what most citizens are familiar with, they’re sometimes shared over many departments. Snow clearing, for instance, might be done by the roads department, parks department, or transit, depending on where the snow falls.

City administration hopes that by breaking down the cost by service, rather than department, citizens will better understand the costs.

The numbers are based on the operating budget and do not include the capital budget, which is the money set aside to build new infrastructure. The city does not generally use property tax money for capital costs.

At $404 annually, policing is by far the most expensive service on a per capita cost, followed by fire and emergency services at $180 per person annually. 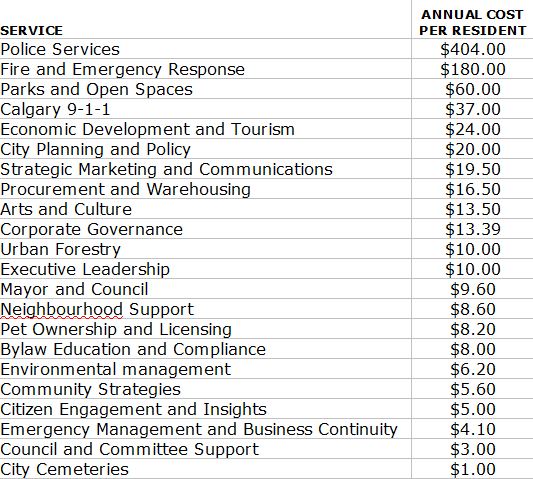 While many services in the budget are based on cost per delivery – such as water or 311 calls – Male said they decided to divide some – such as arts and culture services – equally among the population.

“It’s really saying the arts and culture services are open to everyone, and that’s how we came up with that calculation,” she said.

Ward 1 Councillor Ward Sutherland told administration he loves seeing these numbers broken out in this way, and he hopes to see more of the information online.

“What I suggested for them to do is a total spreadsheet with the lines of service and have it permanently on the website so citizens can look it up,” said Sutherland

He said that would help create awareness for what things actually cost.

Male said getting this information to the city’s website is something they’ll be doing in the coming months. They’ll also be using these numbers as a benchmark going forward, so people will see how costs increase or decrease over time.

“As investments get made into services, as efficiencies are found in services, I would see us bench-marking that over time,” said Male.

Editor’s Note: This version of the story adds a line to clarify that the numbers are based on the city’s operating budget, and not its capital budget.