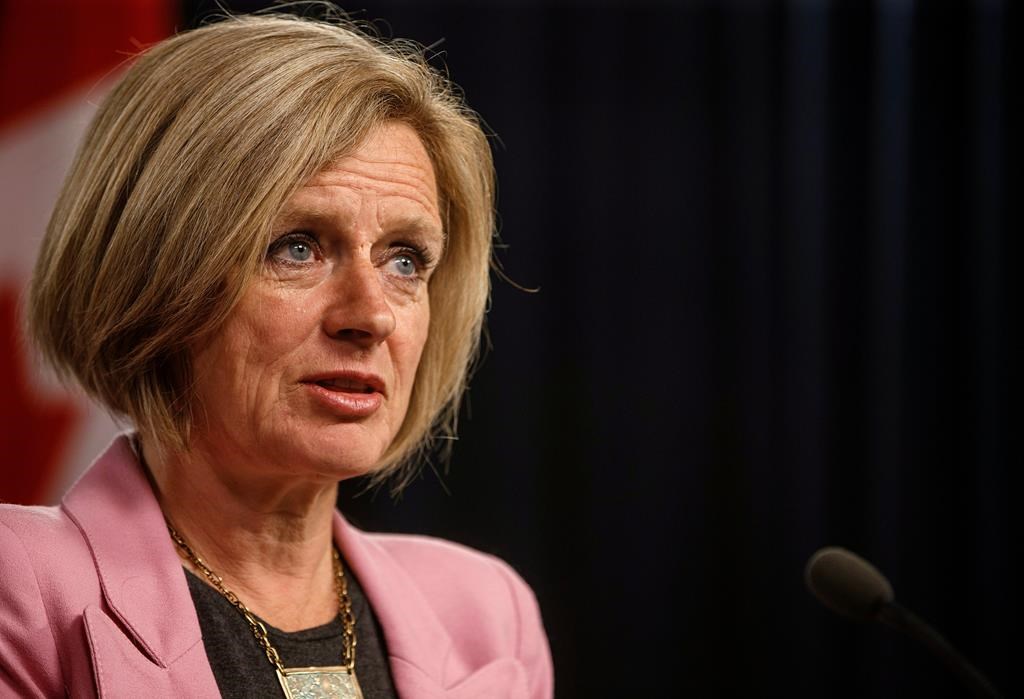 EDMONTON — Alberta Premier Rachel Notley says while other western premiers meeting in Yellowknife will be talking about how to spend money, she’ll be working in Alberta figuring out how to earn it.

Notley said she is not attending the meeting Wednesday because her time is better spent making sure the Trans Mountain pipeline project goes ahead.

“When it comes to interprovincial relations, it’s not business as usual — not even close,” she said Tuesday in Edmonton. “That is why I’ve chosen to not attend the western premiers meeting.

“My time is better spent here.”

The main focus of the western premiers conference is likely to be the development of a national pharmacare program.

Notley said issues such as pharmacare are important and Alberta will be represented by deputy premier and Minister of Health Sarah Hoffman.

“In representing Alberta at the table, we want to make something very clear,” she said. “If we want to make sure that every Canadian can get the medications they need, we need to be able to pay for it.

Notley said one participant at the meeting — B.C. Premier John Horgan — is trying to shut down the Trans Mountain pipeline and take $15 billion out of the Canadian economy.

“Pharmacare does not grow on trees,” she said. “In order to protect and improve the things that matter to people, like pharmacare, we need a strong, functioning national economy.

“Canada has to work for all Canadians. That’s why we’re fighting for the pipeline.”

A spokesperson for Horgan’s office said the B.C. premier was heading to Yellowknife focused on a national pharmacare program and on ensuring provinces retain a leadership role in any national drug plan.

He’s aware that B.C. and Alberta don’t agree on the pipeline expansion project, the official said.

Notley said it might be worth going to the meeting to chastise Horgan if a decision on Trans Mountain were still a long way off, but the deadline is too soon now.

“We’re very close to some very important decisions that need to be made, very complex decisions with a lot of moving parts, so I need to be here.”

Owner Kinder Morgan has ceased all non-essential spending on the project until it receives assurances it can proceed without delays. The company has set May 31 as a deadline for getting those guarantees.

Alberta sees the pipeline as key to moving bitumen from the province to the west coast and from there to lucrative overseas markets.

Opposition United Conservative Party Leader Jason Kenney said the pipeline is hanging by a thread because of the Notley and Trudeau government’s mishandling of the file.

He said Notley is hiding out in Edmonton when she should be facing down Horgan in Yellowknife.

“She should be there in Yellowknife telling John Horgan that she will be using that turn-off-the-taps-legislation unless B.C. stops its obstruction of our energy.”

The legislation, Bill 12, would give Alberta the power to intervene in oil and gas exports, potentially causing painful fuel price spikes in B.C.

Kenney said the premiers of the Northwest Territories, Saskatchewan and Manitoba would have backed Notley up, had she chosen to go to the meeting.

“That would be a great opportunity to make it clear to John Horgan that he is off-side overwhelming opinion in Western Canada and that the western premier’s group would just grind to a halt unless, and until, he agrees to move our resources to market.”

Other western premiers have started to weigh in on the matter that’s dividing Canada.

“It’s a very divisive and important issue,” said Manitoba Premier Brian Pallister. “At the same time, a pipeline that would matter greatly to the Canadian economy that has gone through all of the regulatory hoops — which are onerous — now being blocked by the actions of the British Columbia government … highlights the need for us to have a rules-based system in our country.”

Pallister said that would allow Canadians to “work together as a family and not have these barriers among our provinces get in the way of creating a wealthier country.”

(Companies in this story: TSX:KML)

— With files from Dirk Meissner in Victoria, Lauren Krugel in Calgary and Steve Lambert in Winnipeg