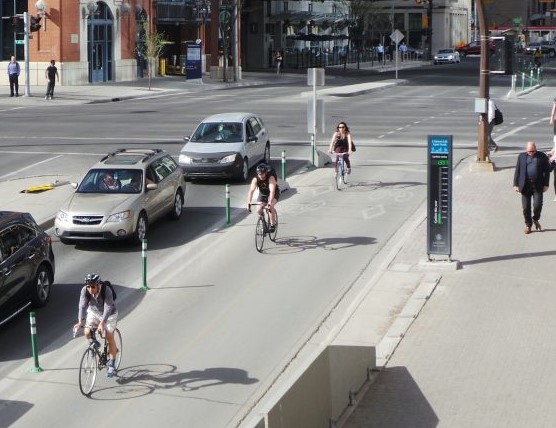 Every cyclist who rides their bike into Calgary’s downtown core is counted on one of the city’s 26 counters, but other users are falling through the cracks.

That’s something that Tom Thivener, the city’s active transportation projects coordinator, is looking to change. With the city set to change its bylaws to allow other modes of transportation onto bike lanes – namely skateboards and scooters – he’s looking at ways to keep tabs on how Calgarians are getting around the city.

“We’ve been monitoring mobility trends for decades,” said Thivener. “We have four plus decades of cordon counts, and six decades of traffic volume maps.”

Cordon counts are periodic manual counts of key streets where people sit out and manually keep track of people entering the city, including how they’re travelling.

The cycle tracks now have automated counters which tick up as each cycle passes by. Thivener says some of the counters are also on city pathways, and they also note the number of pedestrians on foot, separate from cyclists.

Thivener believes the technology can dig a little deeper into the data.

“Right now we’re talking to the manufacturer of the devices to see if we can capture the difference between people cycling and people using these other devices,” he explained. “It has to do with the metal in the bicycles.”

The city’s counters are currently made by Eco-Counter – a Montreal-based company.

Matt Ainsley, market strategist for Eco-Counter, said electronic scooters have become popular in many cities in a relatively short amount of time, and Calgary is not the only city asking if the company can change its counters to monitor e-scooters.

“Counting e-scooters presents a unique set of technological challenges and, in response, we are currently undertaking research and development to produce counting technology to count and classify e-scooters,” said Ainsley in an email. “We hope to make this product available soon to meet the needs of cities around the world.”

Thivener said even though they’re not technically allowed, Calgarians are already using scooters and skateboards on the city’s cycle tracks. They find the counters are registering about one in 10 scooters as a bicycle, which is not good enough.

He wants more accurate numbers so the city can keep drilling down on those traffic numbers that they’ve been collecting for 60+ years.

“I think it would help us plan our active transportation networks better,” he said. “Knowing the trends that we know, knowing how much walking and biking has increased, the trend has been substantial.

“It’s just prudent to get ahead of the storm that could be coming and track the numbers as accurately as possible.”

But Ward 4 Councillor Sean Chu – a longtime opponent of the cycle track – feels the technology to distinguish between various modes of transportation just doesn’t exist and won’t be accurate.

“There’s no magical tools or devices to distinguish bikes with others,” said Chu. “On Fifth Street, the counter is really high, and it’s counting everything metal.”

He said people pushing shopping carts past have sent the number higher.

“My fear is that – the city will use the number – to say oh, look we increased the number, we need more tracks,” said Chu. “Even though it could be cycle track is only 10 per cent of usage.”