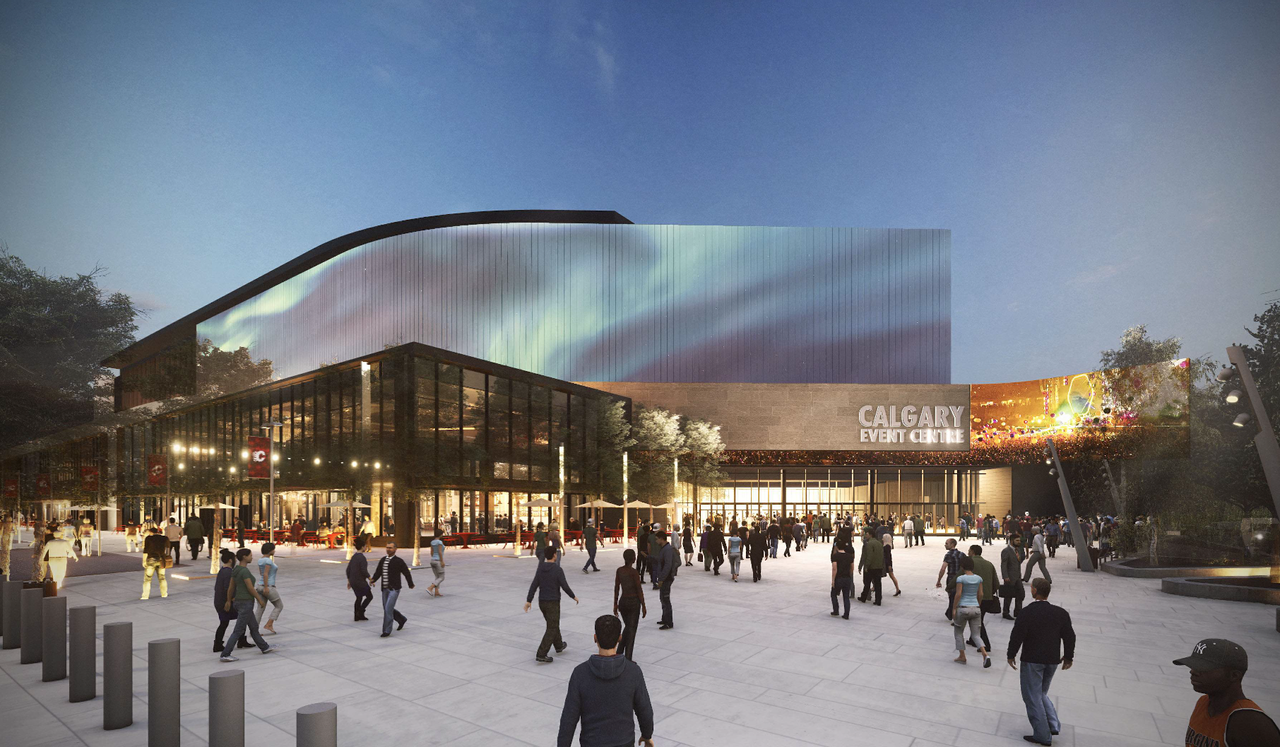 City administration has recommended that the development permit for the new Calgary Event Centre be approved, but the area community association isn’t convinced original project goals were met.

The development permit approval will be discussed at Thursday’s Calgary Planning Commission meeting. Should it be approved, it paves the way for construction on the $600+ million project to begin.

It will be the final step in cementing the anchor tenant for Calgary’s Culture and Entertainment District in the Beltline / Victoria Park area. In April, the project was paused by the Calgary Municipal Land Corporation (CMLC) after differences in project estimates and facility requirements.

The pause remained until a breakthrough in late July. A revised deal was approved in July that saw more cash from the city. The CMLC was also removed as project manager.

Details on the development permit, submitted in August by Dialog Architecture on behalf of the Calgary Sports and Entertainment Corporation (CSEC), showed plan details and new elevation renderings.

That’s left the Beltline Neighbourhoods Association (BNA) feeling like the project doesn’t live up to the original ambition.

“If we compare (the new arena) alongside the new Central Library, the BMO Centre expansion the Glenbow expansion and renovation, even arts Commons, which is still in progress, as well as … the new Calgary YMCAs, the architecture of the event center more closely resembles a big box mall built on the edge of the city along Deerfoot or Stoney Trail than it does any sort of publicly-funded civic building,” said BNA president, Peter Oliver.

Beyond that, the BNA posted online a detailed breakdown of concerns they have with the project.

Oliver said the final concern is the Event Centre’s integration into the public realm. It’s critical to get this right to realize the promised return on investment to the city, Oliver said.

The BNA is concerned they’re trying to resurrect a failed Flames Central-style concept on the ‘active edges’ of the development. He said it lacks anything compelling that would “serve as an anchor for the culture and entertainment district.”

“It really doesn’t show and probably doesn’t reflect the magnitude of public investment that’s being put into it,” Oliver said.

Ward 7 Coun. Terry Wong, who sits on the Calgary Planning Commission, said they will definitely be looking at how this meshes with the surrounding area.

“I want to be sure that the integration is done right, for both Victoria Park as well as the business community around there,” Wong said.

“More importantly, I want to be sure that what is being provided… gives back to Calgarians the greatest value for their for the city’s contribution.”

Wong said he’ll be asking questions related to this aspect during the Thursday meeting.

The applicant was required to amend plans to meet conditions in a 15-page document. It included things like an updated climate resilience report, areas for photovoltaic solar cells, building façade finishes and the like.

Oliver said the plans for Indigenous elements are lacking given the city’s commitment to Truth and Reconciliation. The arena site is located at the confluence of the Bow and Elbow Rivers. It’s a meaningful location for Treaty 7 Nations.

He said the previous council may have been naïve to remove CMLC from the project. They were more apt to follow through on the original council vision – particularly around the public realm and the Rivers District Master Plan.

Dialog submitted an eight-page summary of the public engagement done and how they integrated input into the decisions.

“Input that we received from stakeholders helped us refine the design in many ways,” the document read.

“We listened and adjusted the design as much as we could balancing the different points of view that we received.”

Coun. Wong said that the public has had the opportunity to share their opinions on the project during the land use and prior council meetings.  He did say that at the development permit point – when the specifics are being discussed – the opportunities are limited.

That’s the part that troubles Oliver.  This is the most important phase in the process – where the puck meets the stick, so to speak.

Things like added parking lots despite two (one future one) LRTs nearby, priority on VIP facilities, and lounges.

“What we see here in this proposal is a very inward-looking project,” he said.

“It really seems to be focused on revenue generation for the operator and less so on civic, public return on investment.”

He called the lack of a public hearing on the design “scandalous.”  He said the Green Line has been reviewed and engaged to death before moving ahead. There are more public hearings when a single-family home is converted to row housing, he said.

The defining moment is left with the Calgary Planning Commission.

“I hope that the members of the CPC understand that their responsibility in this is far greater on this than on any other project because the way that this has been set up to short circuit any sort of public feedback process,” he said.

The meeting begins at 1 p.m. Thursday with nine items on the agenda. This is the second item slated for discussion.

CSEC was contacted for comment on the next steps for this project, should it be approved. A response hasn’t yet been provided.