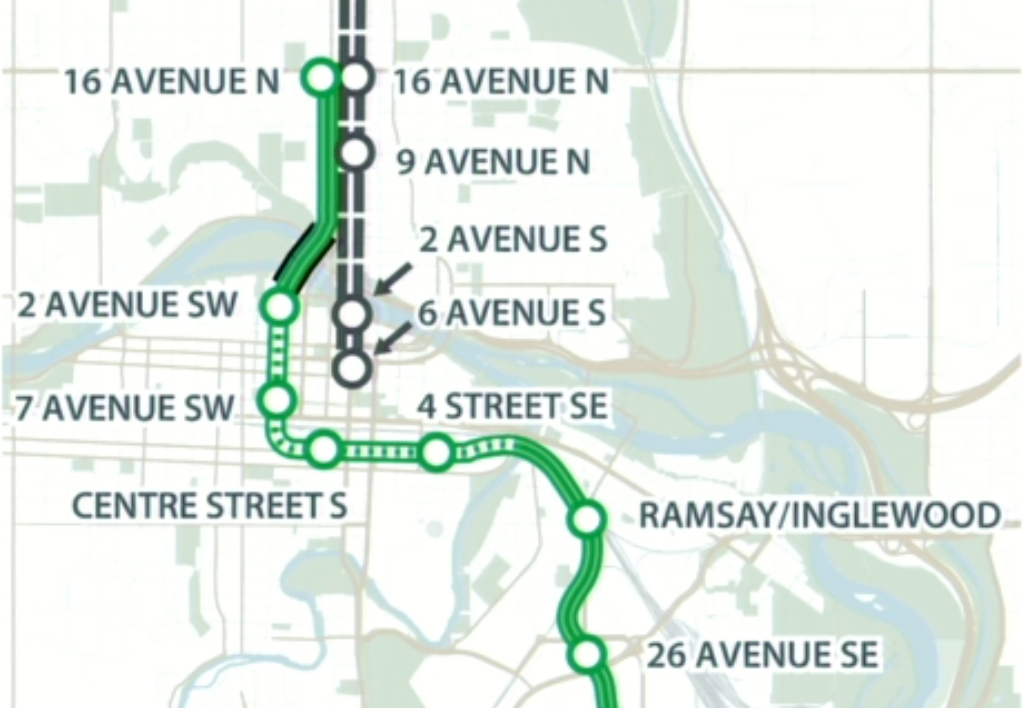 Calgary’s Green Line committee passed the latest administration-proposed alignment, but there’s a chance it will be amended in two weeks.

The committee met again Tuesday, continuing Monday’s meeting on the proposal. On Monday, councillors heard from administration and the public on their Green Line preference.

After a closed meeting and further questions to the administration Tuesday, the initial city recommendation was carried 8-5.

“This has been a 10-year project. It was about better serving the citizens and also building the best possible future,” said Coun. Gian-Carlo Carra.

“I call the Green Line the backbone of Calgary’s future, not two legs.”

Still, there may be several attempted amendments coming at the June 15 meeting. These weren’t discussed at committee.

Yesterday, committee heard plans for the updated Green Line alignment and submissions from the public.

The alignment presented yesterday included an LRT bridge over the Bow River, at-grade LRT running through Center Street including the 9 Avenue station and underground LRT in the Beltline, all of which have been topics of much debate.

The scope of the current project is from Shepard to 16 Avenue N – and they want segment 1 (south) to go to tender July 24.

“This is not the alignment I would have preferred when we first started, but ultimately [administration] have answered every single question we’ve had,” said Mayor Nenshi.

The future of the Green Line looks to build north to 96 Avenue and south to Seton. The current recommendation is for 20 km of the project, the final line is at 46 km.

Early Monday, four councillors put forth a plan for a truncated Green Line that would see the line end at Eau Claire, be underground through the downtown and end at Shepherd.

“And in fact, I learned today (Tuesday) that it’s even more of a terrible idea than I thought it was,” said Nenshi.

Nenshi said he believed the 16 Avenue station was a poor choice, but then realized it would have higher new ridership than a McKenzie Towne station, according to administration’s projections.

While the committee passed it along to council, the group didn’t discuss potential amendments.

One of those amendments could be breaking the project into three segments, taking the bridge into the north into its own segment.

Mayor Nenshi said he didn’t mind the idea, provided admin examined it and they could get more bridge, more streetscape and better integration with the north part of the line.

“I wouldn’t mind procuring that separately I just have to understand from our administration how that might work,” Nenshi said.

Some councillors wanted more time to review the project, while others outright rejected it.

“I support the Green Line, however, I still need to put critical eyes on this project,” said Coun. Sean Chu, citing Centre Street businesses worried about being hurt and the impact on Chinatown.

“I will continue to fight for Green Line for Ward 4, but we have to do it properly.”

Not all councilors are on board. Coun. Joe Magliocca said he does not support the Green Line and never has.

“I will not put citizen’s tax dollars in jeopardy,” he said.

“Our job right now is to decide what is the best way to help people in the interim and to ensure that the Green Line is in the best possible position to continue.”

The matter will return to council June 15.