This is no longer a question of whether or not Calgary should host the 2026 Winter Olympic and Paralympic Games.

It’s way beyond that now.

It’s more a question of whether we’re deserving of once again having the Olympic spirit wash through our city.

To understand that spirit, watch this video first.

Two competitors, both battling hard to win. Yet one helps the other. It’s this spirit that defines the Games. In opposition, but willing to set aside competition for something more important: Decency. 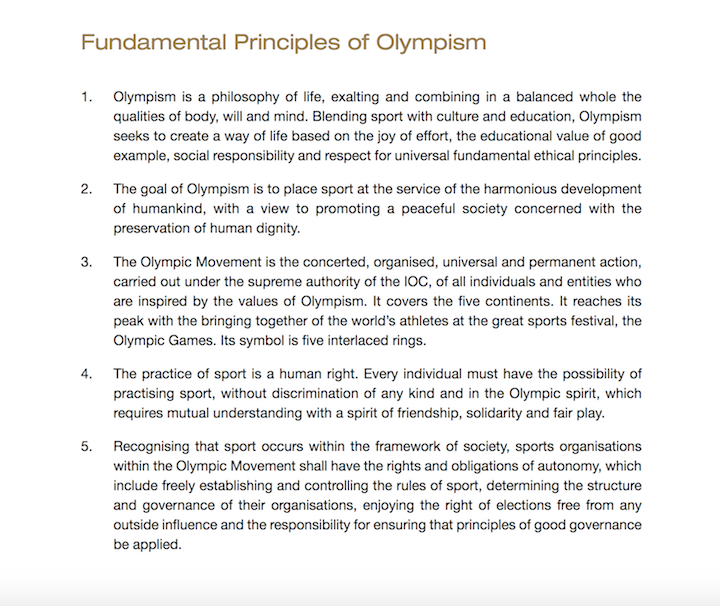 The Olympic rings, arguably the most iconic of Olympic regalia, symbolizes the connection of all people from all continents through sports. It represents a togetherness.

Olive wreaths were given to athletes in the ancient Olympiad and then again in the modern Athens Games. There’s a story of the Greeks being mocked after the Battle of Thermopylae, because their best men were competing in the Olympics – and told the reward was an olive wreath.

“Good heavens! Mardonius, what kind of men are these against whom you have brought us to fight? Men who do not compete for possessions, but for virtue.”‘ – Tigranes, Persian general, as documented in The Histories, by Herodotus.

We are talking about things like virtue, respect, ethical principles, preservation of human dignity, peaceful society and… togetherness.

Now ask yourself: Does Calgary deserve to host the 2026 Winter Games? Very little of the conversation to this point in the hosting debate embodies much of the fundamentals of Olympism, nor the symbols that represent it.

Oh, the irony of Calgary’s pursuit of an Olympic bid. At least with the level of respect this debate’s been given thus far.

Before you counter with, “but the IOC itself doesn’t exude these traits,” remember the IOC is the vehicle created, not the spirit. It’s equivalent of equating faith with the church. One can have faith but distance themselves from the institution of the church.

One would think that cities like Calgary, whose citizens often look down their nose or cast aspersions at previous Olympic cities like Beijing or Sochi for things like human rights abuses or corruption, could find a way to bring a civility to the conversation over whether or not to host the 2026 Winter Olympic Games.

We claim to hold ourselves to a higher moral standard. 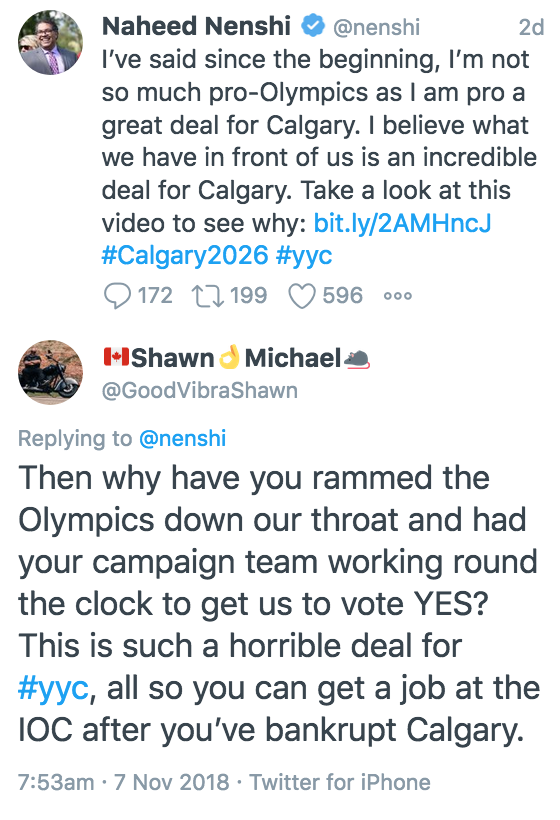 But, we haven’t. It’s seems a little pious in retrospect.

It’s possible to have a conversation without abuse, without misinformation, without scandal, without rhetoric, without name-calling and without shame. But this Calgary Olympic debate has, at many points, been in the gutter. Or lower.

It’s possible to foster healthy debate and constructive rebuttals to develop clear understanding, inclusion and transparency. We can change the diatribe to dialogue.

The problem is, that involves a whole lot of listening and a lot less talking. It’s something we’re not really good at these days. It involves looking people in the eye and being truthful, without spin, without agenda and with real facts, not manipulated ones.

Coun. Evan Woolley, chair of Calgary Olympic Bid Assessment committee, said this has been the most challenging file in his five years in office. Other councillors agreed.

This is after they took a dressing down by Bid Corporation chair Scott Hutcheson at a recent Olympic committee meeting. A handful of councillors publicly took issue with it. That’s where the bar’s been set: Bully people into acquiescence. Tell them, in not so many words, that it’s unholy, un-Calgarian or undemocratic to stand in the way.

You needn’t scroll that long on social media to find an Olympic-sized pool full of falsehoods, inaccuracies, misrepresentations and the weaponization of information that Carra talked about.

This is one of the most blatant, but by no means the only one, on either side.

Because deleting the word "shouldn't" definitely doesn't change the meaning of a statement ….

And then out comes a report on the City of Calgary’s online public engagement poll that showed 46 per cent of responses (6,000 responses) were scrubbed because of bot activity – mostly from the yes side.

In Olympic-terms, this kind of behaviour would likely be considered cheating. In our eyes, it’s tantamount to a Russian-doping scandal on a civic level. (Or wait, what about Russian election tampering…)

In terms of competition for yes or no votes in Calgary’s upcoming plebiscite, has this feud been different? By this measure, we should be disqualified from bidding on the Olympic Games, let alone hosting them.

Spare us the cliché that, “This is not my Calgary.” In fact, it is your Calgary. It’s time we all accept that we are complicit.

Calgary is one of the world’s great cities. But we can be better.

The Bid Corporation has heralded this bid and potential hosting as one that sets a new bar for how Olympic Games post Agenda 2020 should be run – from an economic/fiscal perspective. We have little doubt that will be the case. Calgary is full of bright, pragmatic, innovative people who will make this happen.

But, whether or not Calgary chooses to bid and is eventually chosen as the host city, the Games themselves shouldn’t be the legacy. Nor should it be the buildings we erect or refurbish. We’ve been to that dance before – remember, we hosted in 1988.

Moving forward, Games or no Games, our legacy should be that of elevating civil discourse to the point of empowering citizens, not oppressing them. It should be about bringing together the immense, cumulative power of 1.3 million to build a better city.

We can still disagree. In fact, we can be in staunch opposition. In doing so, however, we can still embody the Olympic ideals.

Right now, it’s a case of Slower, Lower and Weaker.

That alone should be enough to disqualify Calgary from Olympic competition.