While they appear contradictory, they’re both right – both in theory and in practice.  And further, it appears you can’t have one without the other.

City council will debate Monday the merits of a citywide change to an unposted residential speed limit of 30 km/h on local roads and side streets, down from the typical Alberta standard of 50 km/h.  It won’t likely apply to collector routes or those with significant Calgary Transit presence. Council will also consider short-term, quick-build traffic calming measures at higher priority locations, updates to street design policies and guidelines and a long-term strategy for funding street safety improvements (retrofitting older communities).

With recent changes to Alberta’s city charters, cities were given the latitude to alter the default unposted speed limits within their boundaries.

“A sign is not going to change much, because we have designed the streets for higher speeds than 30. The design of the street is conducive to higher speeds,” Alaniz Uribe said.

“When you are a driver and you have wider streets, you have a tendency to speed. That’s documented.”

Alaniz Uribe said the medium-term solutions proposed by the city will have a far greater effect on reducing vehicle-pedestrian collisions and thus create safer neighbourhoods. Ultimately, Alaniz-Uribe said that the design guidelines for residential street construction in Calgary have to change for long-term safety improvements to be seen.

“If their discussion is serious, if we’re really committed to this, there’s a way of doing this more efficiently than just doing signs. I think the signs, sure, you can invest that money I honestly think that most of it’s going to be wasted,” said Alaniz Uribe.

“I’d prefer to see the money invested in much more aggressive interventions based on the data of where the collisions are happening.”

Coun. Farrell doesn’t disagree. But she said it’s a chicken-and-egg situation. If you don’t reduce the default speed limit, you can’t alter the urban roadway design.

At first glance, the reduction in default speed limit to 30km/h seems like a knee-jerk, perhaps even dogmatic, response to addressing pedestrian safety. But, it’s merely the key that unlocks a wide array of urban design changes that builds safer communities.

“Right now, if we have a new community, for example, and we want to slow the speeds and the posted speed is 50, you can’t design for lower than 50,” Farrell said.

“What lowering the speed limit does is allow us to design for a lower speed.”

You’d think that if you want people to go slower, just build the street the way that you want and drivers will go slower, right? Sure. But, that’s not exactly how it works. Oddly enough, it’s tied to the province’s default speed limit and thus the engineering around roads.

With the province’s default speed at 50, it essentially means anywhere there’s no posted limit, the speed limit is assumed to be 50. We’ve understood that since our first foray into driving as learners and then through drivers ed.

That 50 km/h speed limit (and the evidence that 50 per cent of drivers exceed the posted (or unposted) limit) demands a road to be built a certain way by commonly understood and accepted road engineering and construction practices.

While the guidelines aren’t legislated, and there’s some flexibility from one municipality to another, they’re adhered to as best practice in design. The Transportation Association of Canada has a 96-page overview of the guidelines and it’s widely accepted by most, if not all, municipalities across Canada. It’s posted below.

View this document on Scribd

Setting aside the need for a mathematics and engineering whiz, the bottom line is this: You can design a road substantially different for 30 km/h than you can for 50km/h. Put into simple and practical terms, a 30 km/h road with AADT of between 100 and 200 cars can be built at seven metres wide. (It stays the same for 40 km/h, so there’s room built in there for some excessive speed.)

According to the City of Calgary design guidelines, a 50 km/h residential road needs to be at least 8.5 metres wide, but typically at least nine metres when a sidewalk and/or rear lanes exist. 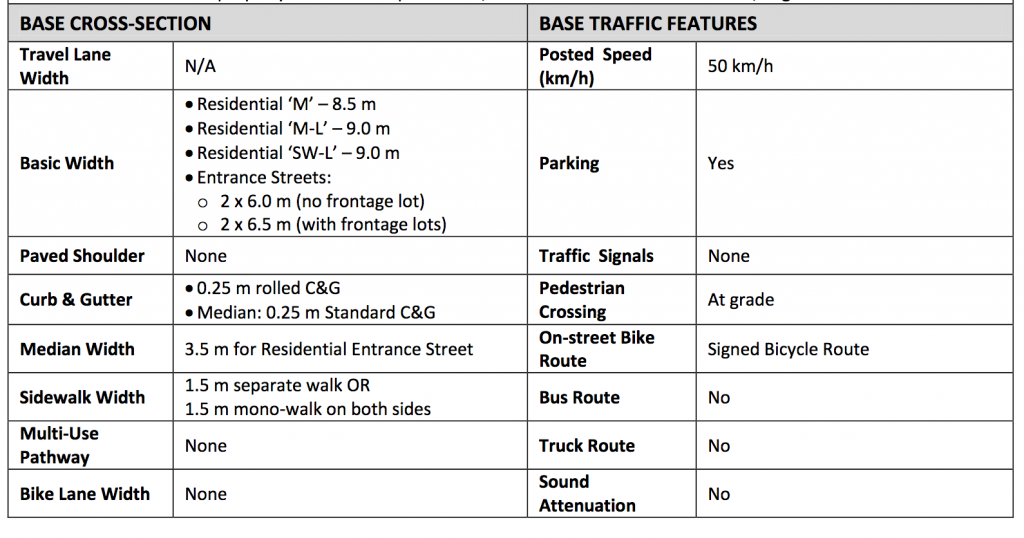 Narrower streets statistically mean slower speeds. Try travelling at 50 km/h on a residential street in one of Calgary’s older, grid-style neighbourhoods (with parking on both sides) and it likely feels unsafe.

Tony Churchill, Traffic Safety lead with the City of Calgary said the city is regularly looking at these street design guidelines.

“We have had a continuous progression in how we’re designing our roadways and the most recent iteration of that is the Complete Streets guide,” he said.

Churchill said the city’s looking at design features that are strong visual and subconscious cues for drivers operate their vehicles at appropriate speeds.

“We know that those types of cues are a lot more credible than putting up a speed limit sign on a roadway, which is otherwise communicating to motorists that it feels like a very safe environment to go at higher speeds,” he said.

“This isn’t consistent with what we’re hoping for in terms of those interactions to have them safely.”

“We over-build our streets. They’re built for speed. It doesn’t matter what you post the speed – if the road is built for speed, people will tend to go faster,” she said.

“What lowering the speed limit does is it allows us to design differently, and that is the key.”

Without the change, Farrell said, future Calgary communities will continue to be built with the 50 km/h standard and the subsequent design guidelines that come with that limit.

While Alaniz Uribe supports the changes to urban design, that’s a long-term play. He believes the greatest immediate impact on city pedestrian safety is in taking action at the primary conflict points.

“The big argument for decreasing the speed limit is that we want the street to be safer, the risk of kids getting hit,” he said.

“Let’s focus on where the big problems are first. Tackle the bigger problems first.”

He said the data is readily available and the city should be fixing these areas. Further, he said much of that data shows the volatile pedestrian areas aren’t on residential streets, but rather the city’s neighbourhood collector routes.

A Sept. 6 CTV Calgary news article included Calgary Police Service statistics that showed of 64 people killed on city streets, only eight per cent of those were on residential roads. The others were at major intersections, the article read. LiveWire requested similar data on pedestrian incidents, but it was not provided by the time this article was published.

The city has calculated the societal cost of these pedestrian collisions at $120 million.

The notice of motion to be debated Monday, and signed on to by six councillors and the mayor, does address immediate solutions “to enhance the new limit through short-term, quick build traffic calming measures at high priority locations.”

Farrell understands that the speed limit reduction isn’t a panacea to pedestrian safety and that traffic calming and urban design are major components. But, right now, she said, the city’s process is off kilter.

“We do have the data. We know the movements that are dangerous. That was part of the direction with the pedestrian strategy,” she said, noting that plan is still unfunded.

“Now, we wait until someone dies – before they warrant a change. How backward is that?”

Churchill said the city’s traffic calming policy is readily available online and shows the criteria used to rank the applications. But it’s request driven and must go through a rigorous consultation with community members, the community association, the Calgary Police Service and community resource officers before it moves forward.

Even then, Farrell said, it doesn’t usually result in a change.

“That eliminates the possibility of making the street safer by design.”

Farrell did say part of the discussion will be around how to deal with problem collector routes and whether or not changes should be made to those areas.

On the surface, a speed reduction alone seems like an attack on drivers looking for a smooth and swift commute each day.

Farrell doesn’t see it that way.

First off, she said at a councillor debrief of what they heard at citizen doors during the city’s last civic election, neighbourhood speed was the number one issue.

“They don’t feel safe in their own neighbourhoods because of speeding traffic,” she said.

She also acknowledged that changing the speed limit is only one aspect.

“I’m not foolish enough to think that the speed limit is the final answer. It’s a whole suite of solutions that must be implemented to make our communities safer,” she said.

From a design perspective, Farrell is right, a change to the speed limit has to come first, so corresponding changes can be made to the city’s design guidelines.

Those design changes, right or wrong in the eyes of the public, can’t be made without the reduction. Road engineering best practices just don’t allow it.

Should the city approve the plan to reduce the speed limit, it wouldn’t be applied immediately. Administration would need to come back to council with an implementation plan, demonstrating which roads would be affected. That report would be required no later than Q4 2019, the notice of motion read.