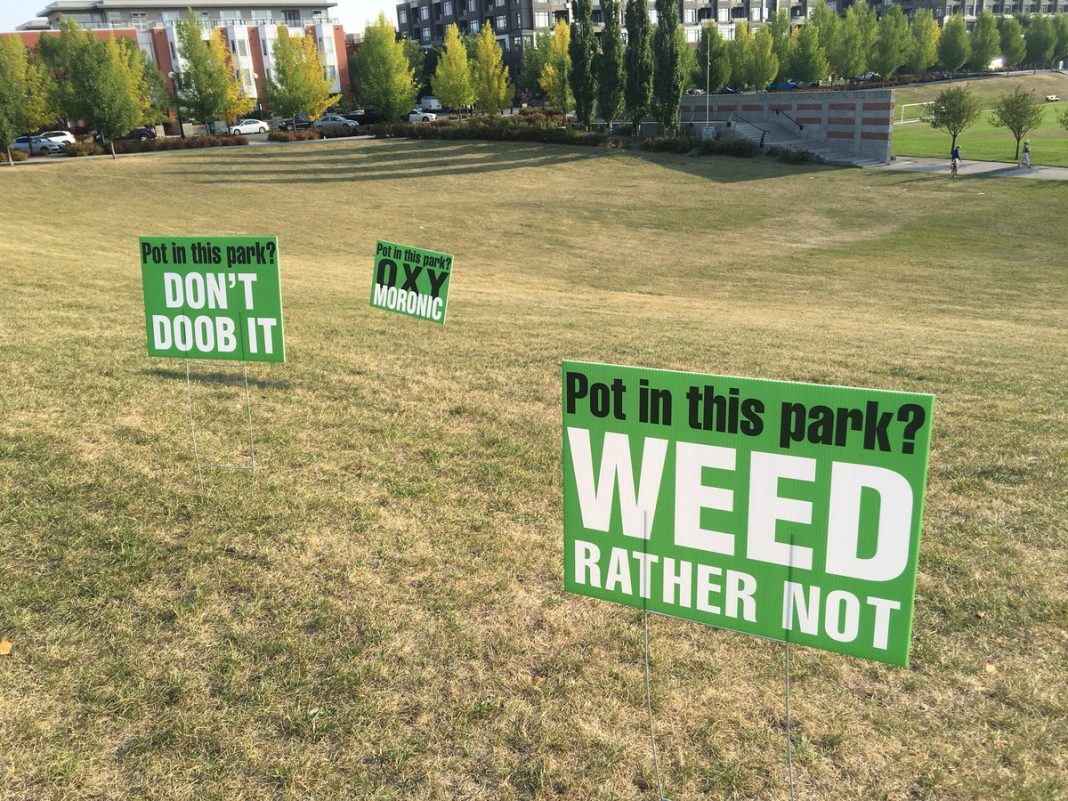 In late August, the city rolled out four proposed areas where citizens would be allowed to smoke pot in public. Calgary’s current cannabis rules forbid users from smoking marijuana in public, unless it’s in one of the designated areas. That leaves condo and apartment residents, along with tourists visiting the city, without a space to toke up when marijuana is legalized in October.

The four proposed locations were as follows:

After the sites were announced Aug. 27, a two-week window of public engagement began.

“The process we created allows the initiating councillor to determine after engagement whether the matter goes to a public hearing of council and Ward 9 Coun. Carra has decided not to proceed to council October 9,” said Matt Zabloski, the city’s lead for cannabis legislation.

As a result, Zabloski said, given the timeline before legalization on Oct. 17, there would be no public cannabis consumption zones available in Calgary. The process is still open for other councillors to submit applications for sites in their wards.

More than 1,800 people participated in the city’s engagement process and Coun. Gian-Carlo Carra said that at least 75 per cent were opposed.

Carra said the opposition was in three primary areas: Those who are against the legalization of cannabis, issues with the specific sites chosen and the last was that without other areas pitched by councillors, there was an issue with concentration of users.

“If you just have one or two or three spaces in a city of this size, then you’re just begging for issues of over concentration,” Carra said.

“This really is only going to work if there’s a diffuse network of these things.”

Carra said it highlighted the need for commercial cafes and other areas open for consumption and suggested the province should act sooner rather than later to establish rules around those locations.

It’s something Bridgeland Riverside Community Association president Brian Beck agreed with. His neighbourhood was to house the Murdoch Park consumption zone and he said the private consumption aspect is a real key to providing people spaces to consume marijuana.

“The province would be the jurisdiction that could, for example, consider cannabis consumption cafes or lounges, that kind of thing,” Beck said.

“People always want to draw the comparison to alcohol and tobacco, and of course there’s bylaws against public consumption of alcohol, but there’s bars to go to.”

The province responded to LiveWire Calgary Wednesday, suggesting they need more clarity from the federal government on edibles before they’ll move ahead with cafes and lounges.

“Though cannabis cafes and lounges will not be permitted on October 17, 2018, our legislation gives the authority to regulate these forms of establishments should government decide to allow them at a later date,” read an emailed statement attributed to Alberta Justice and Solicitor General.

Beck also said there’s a great deal of speculating around whether or not condo and apartment building owners will allow for people to consume cannabis on those properties.

He did reiterate the concern shared by Coun. Carra that when there are few sites put forward, all of the activity from around the city centres on those small spots.

“If you focus on a few sites only, you take whatever the background issues are and you concentrate the pressures on those few sites,” Beck said.

“Undoubtedly it would have been different had this been a blanket, city-wide thing.”

Ultimately, Beck feels the city’s decision is in the best interest of all involved.

“It’s been very consumptive of resources and energy for folks, so I’m glad that rather than continuing on down this road with these four sites, pulling them off the table and allowing for re-examination seems constructive to me,” he said.