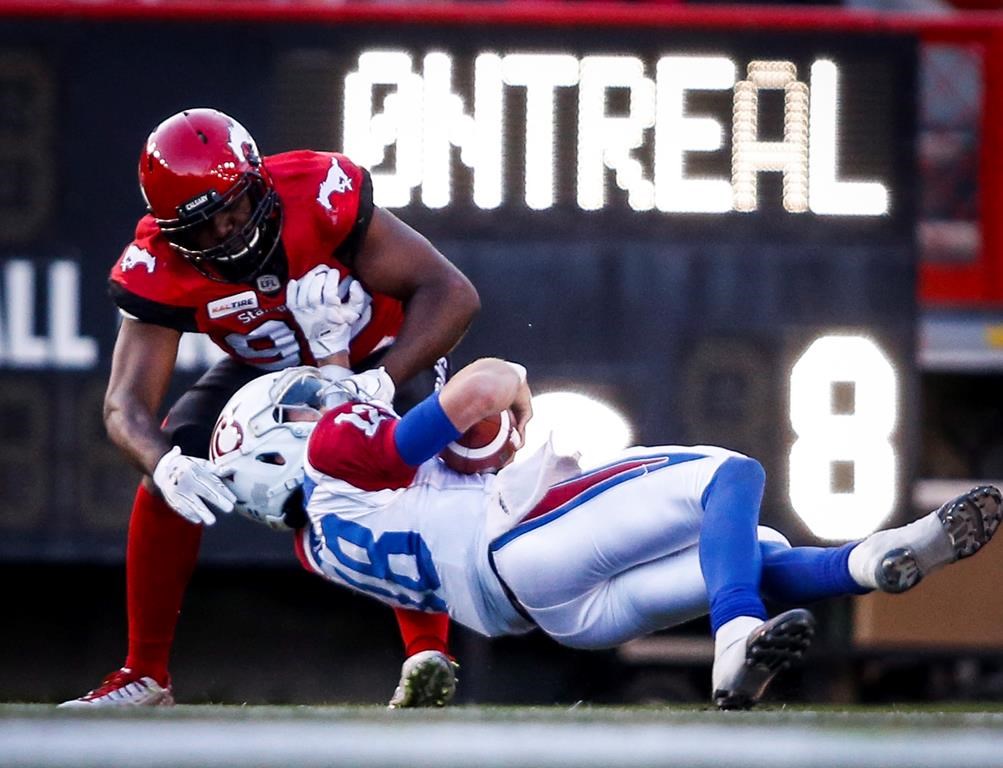 CALGARY — The Calgary Stampeders weren’t very pleased with their performance despite beating the Montreal Alouettes 25-8 on Saturday.

Although the Stampeders (5-0) jumped out to a lead of 19-1 by halftime, they were disappointed they let the Alouettes (1-4) back into the game with an early touchdown in the third quarter.

“It’s interesting because you win by 17 and you just don’t feel great about it,” said Calgary coach Dave Dickenson.

“It’s pro sports and every win’s hard. You really should cherish it and you should really respect your opponent and believe that every win should be special and yet I look at what we did offensively. I didn’t think our special teams were very good. It just makes me want to be better. ”

After Eric Rogers and Kamar Jorden caught touchdown passes from quarterback Bo Levi Mitchell in the first and second quarters respectively, the Stamps had to settle for three field goals by Rene Paredes the rest of the way in front of 26,440 fans at McMahon Stadium.

“Since I’m the offensive co-ordinator, I was disappointed we weren’t able to run the ball,” Dickenson said. “We had a great start and then we thought we were real good and we just backed off from the details and couldn’t get things done.

“They fought hard, too. It was lucky that we got so many turnovers by our defence again, but we’ve got to be better because that won’t happen each and every week. We can hope that happens, but it’s not realistic.”

Nonetheless, the Stamps hung on for their fifth straight victory to begin the season, something the franchise hasn’t accomplished since 1995.

“The reason we’re 5-0 is because we don’t accept what just happened out there,” said Mitchell, who completed 25-of-34 passes for 292 yards. “We’ve got to look at ourselves and accept it for what it is. It is a win. I’m never going to complain about a win. I’ll never say sorry for a win, but I know how good we are. I know how good that group is over there and the plays that we can make and I just want to see us make those plays.”

Mitchell moved past Doug Flutie into second all-time for most passing yards by a Stampeders quarterback. At 20,659 passing yards so far for his career, Mitchell still trails Henry Burris (32,191 yards) for top spot.

B.J. Cunningham caught a touchdown pass from back-up quarterback Matthew Shiltz, while Boris Bede kicked a single for the Alouettes (1-4).

Montreal starting quarterback Drew Willy left the game early in the second quarter with an apparent hand injury. He was 3 for 4 for 17 yards when Shiltz replaced him at 11:46 of the second. Willy was seen shaking his right hand at one point before eventually heading to the Montreal locker-room early in the second.

“Drew got a gash on his finger, came in and got stitches, came back out in the second (half), but I just didn’t feel like he could function in that situation,” said Montreal coach Mike Sherman. “Obviously at that point, we gave Matt the reins and let him carry us the rest of the way.”

Willy also suffered an upper-body injury in Week 3 at Saskatchewan and sat out Week 4 against Ottawa before making his short-lived return.

Shiltz completed 16-of-25 passes for 160 yards, while he was also intercepted twice and sacked three times.

“It’s the next man up mentality and you’ve got to be prepared when your numbers called,” Shiltz said. “I got the call today, but unfortunately we came out on the losing end. I’ve just got to be better next time.”

After giving up an 84-yard single to Bede on the opening kickoff of the game, the Stamps responded with a six-play, 75-yard drive that was capped off by a seven-yard touchdown catch by Rogers. Jorden then caught a short pass from Mitchell in the end zone for a two-point convert to give Calgary an 8-1 lead.

Rob Maver booted a 44-yard punt single late in the first quarter for Calgary before Jorden caught a 30-yard TD pass three minutes into the second.

The Stamps extended their lead to 19-1 with 25 seconds to play in the first half thanks to a 40-yard field goal by Paredes.

The Als opened up the third quarter with an eight-play, 79-yard drive that culminated with Shiltz tossing a 20-yard TD pass to Cunningham.

A pair of Montreal drives were then stalled as Shiltz was hit hard by Alex Singleton on the same play that he threw an interception to Emanuel Davis before he was sacked by Ja’Gared Davis a short time later.

“That’s part of the game, make them one dimensional and take it out of the running back’s hand and then get after the quarterback,” Singleton said. “When everyone’s making plays, it’s a lot easier than when just a couple guys are.”

With just eight seconds to go in the game, Shiltz was sacked by James Vaughters to end another Montreal drive.