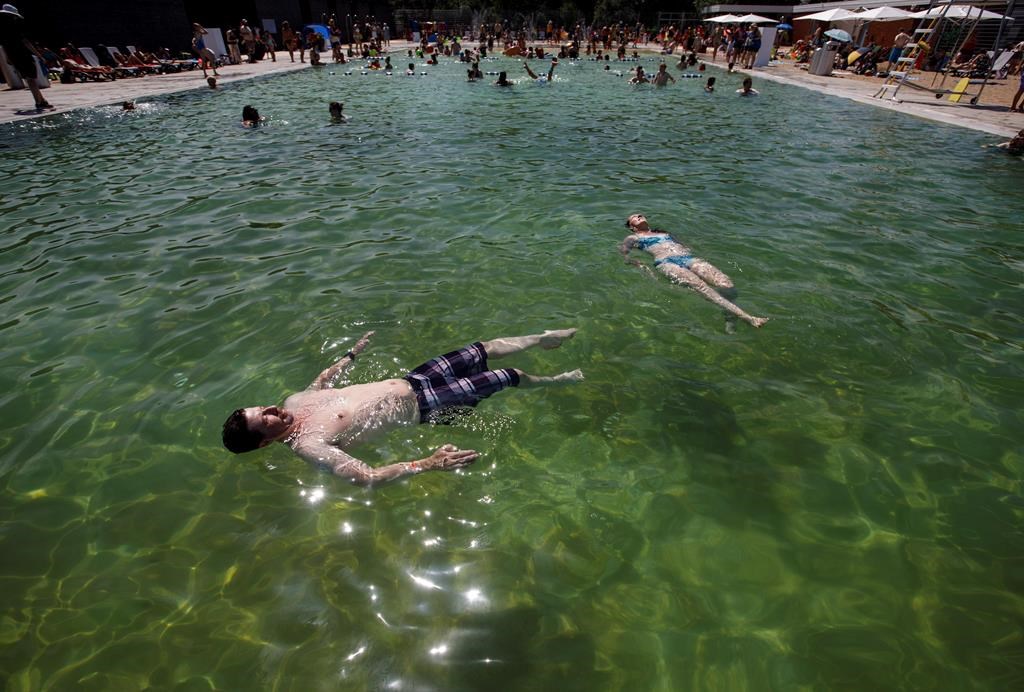 EDMONTON — Any neighbourhood swimming pool is typically crowded on a July afternoon when it’s 30 C, but a new naturally filtered pool in Edmonton is so unusual that people are lining up from all over the city for a dip in its emerald-green water.

The Borden Natural Swimming Pool — which cost $14.4 million and opened to the public earlier this month — uses plants, zooplankton and granite rather than chlorine or salt to filter its water.

City officials say it’s the first of its kind in Canada and only the second in North America.

“The water is amazingly clear and beautiful. You can open your eyes under the water and see,” said Meaghan Bouchard, who brought her two kids one day this week and waited for over an hour to get in.

Parts of the natural filter, which resembles a swamp, sit in a fenced area and attract curious bathers, in trunks and bikinis, who peer in and marvel that the shallow pond with tall grass is cleaning the water they’ve just been swimming in.

Cyndi Schlosser, the facility manager, said the natural pool is an alternative for people who have sensitivities to chemically treated water.

“The plants actually absorb a lot of what would be contaminants to humans, but would be nutrients for the plants,” Schlosser said.

There are special rules for visitors to the natural pool to keep what’s bad for the plants out.

Phosphates, which are in sunscreens and shampoos, have to be washed off with a cleansing head-to-toe shower, and staff watch to make sure you take one before entering the pool. Cotton is banned because it may contain dyes and other contaminants that hurt the plants.

The water is also kept on the nippy side. Schlosser said the pool is heated to 23 C and relies on the sun for anything warmer. But if the water temperature increases to 29 C, everyone has to get out because of a greater potential for bacterial growth.

So far, people have been following the rules.

“It’s a lot of education and just finding out how it’s different, because you’re part of the environment and you’re part of the system,” Schlosser said. “To help keep it open, we need the public’s assistance to ensure we maintain good water quality.”

On hot days this week, there have been long lineups by the time the pool opened at noon, and the queue remained long through the afternoon. The pool can handle 400 bathers at one time, but has a limit of 980 a day. When that’s reached, it has to close because the filter wouldn’t be able to keep up.

Schlosser said the filtration system is in its infancy and is designed to adjust over time.

The pool is so far meeting water quality requirements. But what happens if there’s an incident with fecal matter — something lifeguards refer to as a “Code Brown?”

Schlosser said the natural filter can deal with it, but the pool has to be cleared of swimmers until biological testing for bacteria comes up clear.

Shauna Graham, operations supervisor for Edmonton’s leisure centres, said it was challenging to get the pool built because its lack of chemicals means it technically isn’t a pool under Alberta health regulations. And it’s not a lake, either.

“It looks like regulations will be written based on the work we’ve done,” Graham said.

The kids enjoy the pool, regardless, but the cool water was a bit of a surprise for Gemma Whitford, 11, her sister Lillian, 8, and their neighbour, Jaida Zaparyniuk, who is 9.

“It’s freezing cold,” Jaida said. “It’s nice on a hot day, but if it was winter we’d all probably be frozen!”