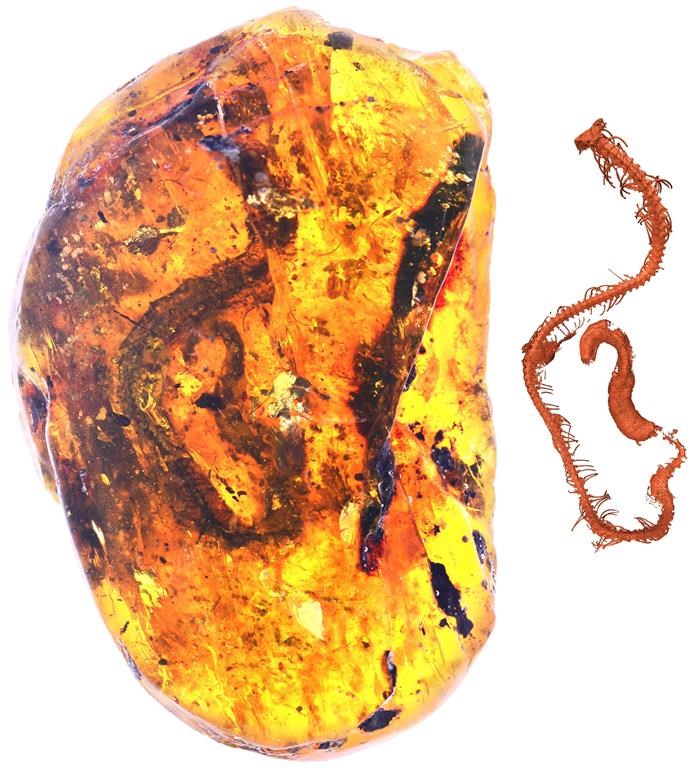 EDMONTON — It curves elegantly, its delicate bones looking as if they could easily slither out of the amber encasing them into the forest undergrowth that would have been home.

The oldest fossil of a baby snake ever found leaves University of Alberta paleontologist Tiago Rodrigues Simoes in awe.

Simoes, with fellow paleontologist Mike Caldwell, describes their 100-million-year baby in an article published in the journal Science Advances on Wednesday.

The snake skeleton, less than five centimetres long, is almost complete except for the skull. Entombed in a chunk of amber about the size of an adult thumb, it includes 97 tiny vertebrae, most with their feathery ribs still attached.

The sample comes from Myanmar, where amber quarries have been around for decades. Caldwell said the snake was discovered in a quarry that was only opened a couple of years ago.

The paleontologists’ attention was first drawn to the amber by a colleague in Saskatchewan, who was interested in what seemed to be pieces of snakeskin within it. That turned out to be true, but a little ho-hum.

“It’s kind of cool,” said Caldwell. “But you can’t tell much of a story with a piece of shed snakeskin, even if it’s got colour on it, or at least light and dark patterning.”

A couple of months later, the colleague called back. He’d had a chance to examine the sample more closely and thought what was first identified as a centipede looked more like a snake.

The team went at it with sophisticated imaging technology from CT scans to synchrotrons. Without removing the fossil from the amber, they laid bare its smallest details.

“The beauty of this thing is that you can actually see it’s a brand-new baby snake,” Caldwell said. “It’s the interior details that make it clear.

It turns out that ancient snakes formed much the same way modern ones do.

The fossilized baby snake’s spinal cord was still turning into bone in the same way those of its descendants still do. The fossil also showed the beginnings of other features found in adult snakes that were growing exactly as they do in contemporary snakelets.

“We have some of the major elements of development constant,” Simoes said. “Maybe it’s common to all of them in their early evolutionary history.”

Perhaps just as important is what else was found in the amber — many examples of bugs and debris that would be found on a forest floor.

The baby is the first one to prove that snakes lived in forests, too, fleshing out understanding of both ancient reptile and forest ecology.

“It is an ancient form of super glue,” Caldwell said. “That’s the magic of amber.

“The marvellous thing about amber is that it falls out of a tree and it hits whatever was at the bottom of the tree. It picks up the bugs and the plants and the bug poop. And the baby snakes.

“We’re not ever going to get that in the rock record.”