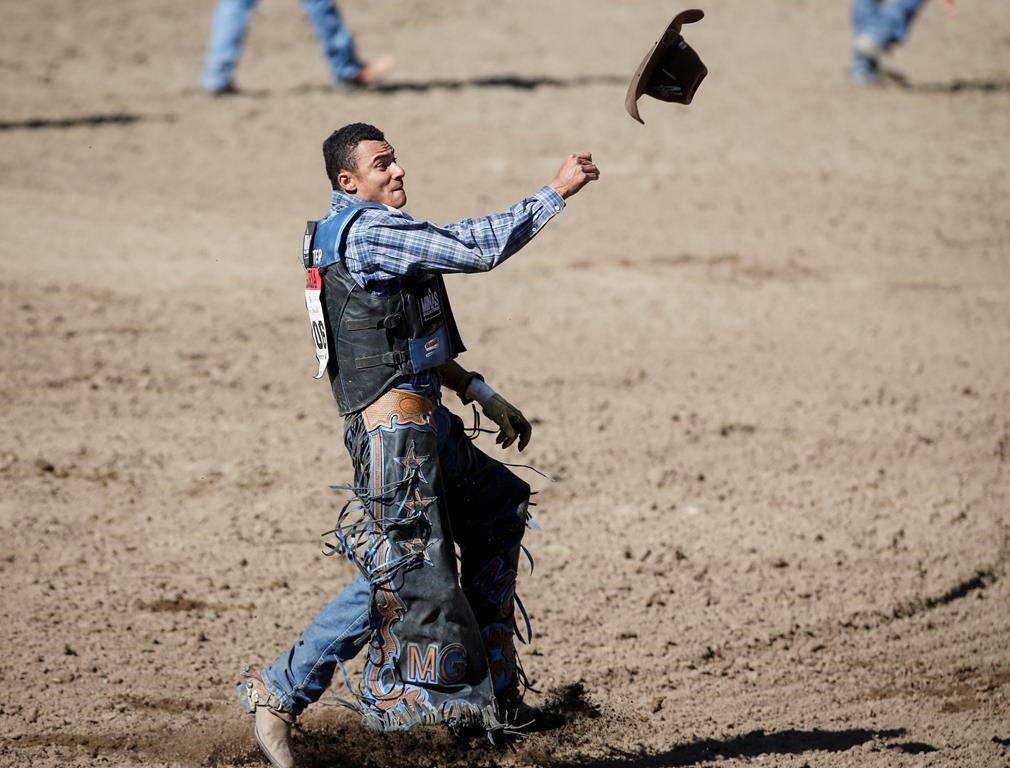 CALGARY — Brazilian bull rider Marcos Gloria made the most of his second chance to win $100,000 at the Calgary Stampede rodeo on Sunday.

Gloria was originally bucked off Happy Camper, but was given another chance because the other three finalists — Fabiano Vieira of Brazil, Joe Frost of Randlett, Utah and Ty Wallace of Collbran, Colo. — were all thrown off their bulls as well.

“I’m glad that I had a second chance,” said Gloria through translator Andre Portis, a retired bull rider with whom he lives with in Edmonton. “I’m very happy the way everything turned out.”

Although Gloria was injured after Happy Camper stepped on his leg when he was bucked off, his decision to shake off the ailment turned out to be a profitable one.

“They let me know I had to run and get on the next bull, it was all or nothing,” he said, while adding that he had an “unreal” experience at the Stampede. “I’ve never seen anything this big. I’m very happy and I love Canadians.”

Ten competitors in each of the six events qualified to compete on Sunday and only the top four from the first go-round advanced to the finals. The winner of each event was awarded $100,000, while the second-place finisher took home $25,000. Third and fourth spots paid out $15,000 and $10,000 respectively.

Tuf Cooper of Weatherford, Texas, won the tie-down roping title in a time of 6.8 seconds to edge out Caleb Smidt of Bellville, Texas. It’s the second Calgary Stampede title for Cooper, who also won in 2011.

“He’s become a staple of my career in a short amount of time,” said Champion of Virgil. “To be able win the Stampede twice now, my head’s spinning.”

Champion edged out Jake Vold of Airdrie, Alta., by just half a point to finish first. Vold still took home the second-place prize of $25,000 following his 92-point ride aboard Trail Dust.

“That wasn’t the best run I made all week,” said Reeves, who was surprised his time held up. “I figured I was coming in second, for sure.”

Ryder Wright of Milford, Utah finished first in the saddle bronc event by virtue of his impressive 93-point ride atop Stampede Warrior.

“He turned out of there and went to bucking,” said Wright of Stampede Warrior. “He stayed a little closer to the chutes than he did earlier in the week. That horse is really strong. He can really jump and kick and crack. You’ve just got to stay back and keep your feet on (him) or you’re going to get your head popped off.”

Zeke Thurston of Big Valley, Alta., wasn’t able to win his third straight saddle bronc championship at the Stampede, but he still managed to finish second following his 90-point performance aboard Get Smart.

“It’s awesome to be on the top of the list with any of the guys that have been here,” Wright said.

Hailey Kinsel of Cotulla, Texas won the barrel racing championship in a time of 17.078 seconds to edge out Kelly Bruner of Millsap, Texas, by just .028 seconds for top spot.

“I really enjoyed the experience overall,” said Kinsel of her first time competing at the Stampede.

She also commended her horse, Sister, for handling the pressure of racing on such a big stage.

“You can’t ever tell when they’re going to like an arena or not,” Kinsel said. “I’m just glad she did. She liked it here. She handles the pressure and she’s very tough and very strong, so handles all the runs very well, so that’s a blessing.”