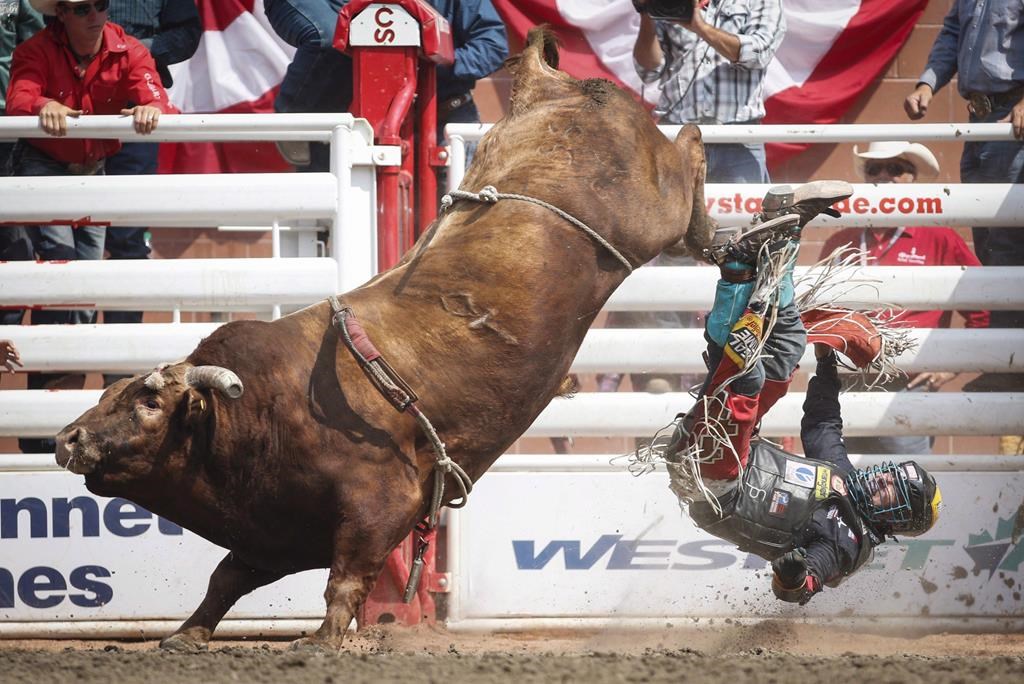 CALGARY — Eight seconds is synonymous with rodeo, even if its origins are hazy.

That time interval is unique to rodeo in sport. But how was it determined that someone should ride a bucking bull or bronc for about the same amount of time it takes to start your car and back out of the driveway?

“Most ranches and outfits had a horsebreaker on staff and maybe more than one,” Poulsen explained. “It got to be kind of a competition where one ranch would challenge another and just say ‘let’s see if your guy can ride better than our guy.’ There wasn’t a time limit initially. The guy would ride for as long as he could.

“Eventually it got to be where it was a judged event. Once that happened, you needed a time frame and chutes. For a time, the ride was actually 10 seconds long. I’m not sure exactly when that changed, but eventually it did.”

Fred Schnell concurs with Poulsen in his 1971 book “Rodeo! The Suicide Circuit.” He wrote that horses were ridden until they stopped bucking prior to the establishment of 10- and eight-second limits.

The 23-year-old is attempting to win a fourth straight title at the annual Stampede rodeo that offers $2 million in prize money.

“Your average bronc will probably take 11 to 12 jumps in eight seconds. You’ve got that many jumps to kind of work with.

“Six seconds I don’t believe would be long enough to showcase to the best of your ability or the livestock’s. Ten might be a little bit too long.”

Bull rider Scott Schiffner of Strathmore, Alta., says both he and the bull are often physically maxed out at eight seconds, if he can stay on that long to get a score from the judges.

“Especially against the best bucking bulls in the world . . . it’s like the 100-metre race in the Olympics,” Schiffner said.

“About eight seconds, a lot of animals are kind of done or on their way down. Even the riders too,” the three-time Canadian champ said.

“Eight seconds seems to be kind of that time limit when I think you get the full potential out of yourself and your animal athlete.”

Trying to get off a bronc or bull safely can keep a rider on an animal for more than eight seconds, but judges score only what they see before the eight-second horn.

The 1994 movie “8 Seconds” about bull rider Lane Frost imprinted that phrase outside the rodeo community.

Frost died in 1989 at age 25 when he was gored by a bull’s horn and trampled at a rodeo in Cheyenne, Wyo.

Cinema immortalizing a young man dying in his prime, like James Dean or Buddy Holly, put rodeo’s “eight seconds” into the mainstream.

“The rodeo world is a little bit of a tricky sport to follow if you’re not in it all the time,” Schiffner said. “That is the one rule that people understand, is that you have to make eight seconds.”

Frost’s death inspired Tuff Hedeman to ride a bull longer than eight seconds in a tribute to his fallen friend.

In his final performance of the 1989 National Finals Rodeo, Hedeman stayed on a bull simply named No. 4 after the eight-second horn for about another eight seconds.

“It was substantially much longer than you’re supposed to,” said the retired four-time world champion from El Paso, Texas.

“Once I rode the bull for eight seconds, I was so kind of caught up in the emotion of the moment, that I just didn’t get off.”

But his extended ride didn’t prove anything about the ability of a rider or a bull to sustain a performance beyond eight seconds, he said.

“Back to this bull, No. 4, after probably five or six seconds, it quit bucking. It had already given up,” Hedeman said. “It didn’t prove anything and I wasn’t out to prove anything.”

No one in the rodeo community seems to be agitating to go back to 10 seconds. There has been talk in the bull riding community of six seconds to produce more successful rides.

Both Hedeman and Schiffner say breeding programs are producing more bulls that are harder to stay on, which means fewer riders make it to eight seconds.

That’s not attractive to the paying public, Hedeman said.

“It’s not exciting to see a guy ride for three jumps and get slammed to the ground. In fact, it’s boring,” he pointed out.

“Whoever decided on eight seconds, I’m OK with it. If I was to alter it in any way, I would go to six or seven seconds with the calibre of bulls they have these days.”