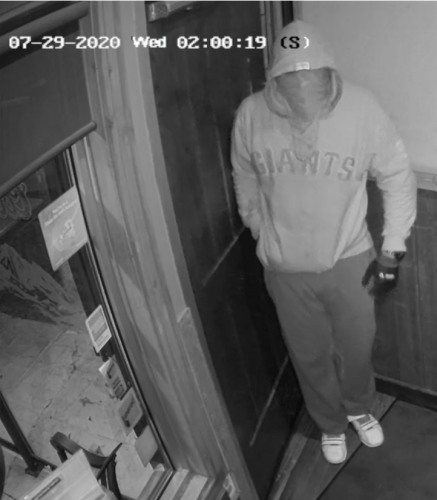 Calgary police are searching for a suspect after an armed hold up at a northeast pub.

On Wednesday, July 29 at around 2 a.m. a man entered Nixx Pub in the 2400 block of Edmonton Trail NE and shot a gun into the ceiling.

The man approached the bar and fired one shot into the ceiling. He told patrons to move out of his way and get on the floor.

The man entered the pub and could be seen on the security camera with one hand in his front pocket and a black glove on the other.

The was about 25 occupants in the pub at that time.

The unidentified man left the scene with an undisclosed amount of cash, running west on 25 Avenue towards Edmonton Trail.

The suspect was wearing a black and white bandana across his face, a grey hoodie with orange and red ‘GIANTS’ lettering, black sweatpants and white shoes.

The suspect is described as approximately 5’9” to 6 feet tall with a muscular built and dark skin, according to police.

If you have any information about this robbery, contact the Calgary Police Service at 403-266-1234.