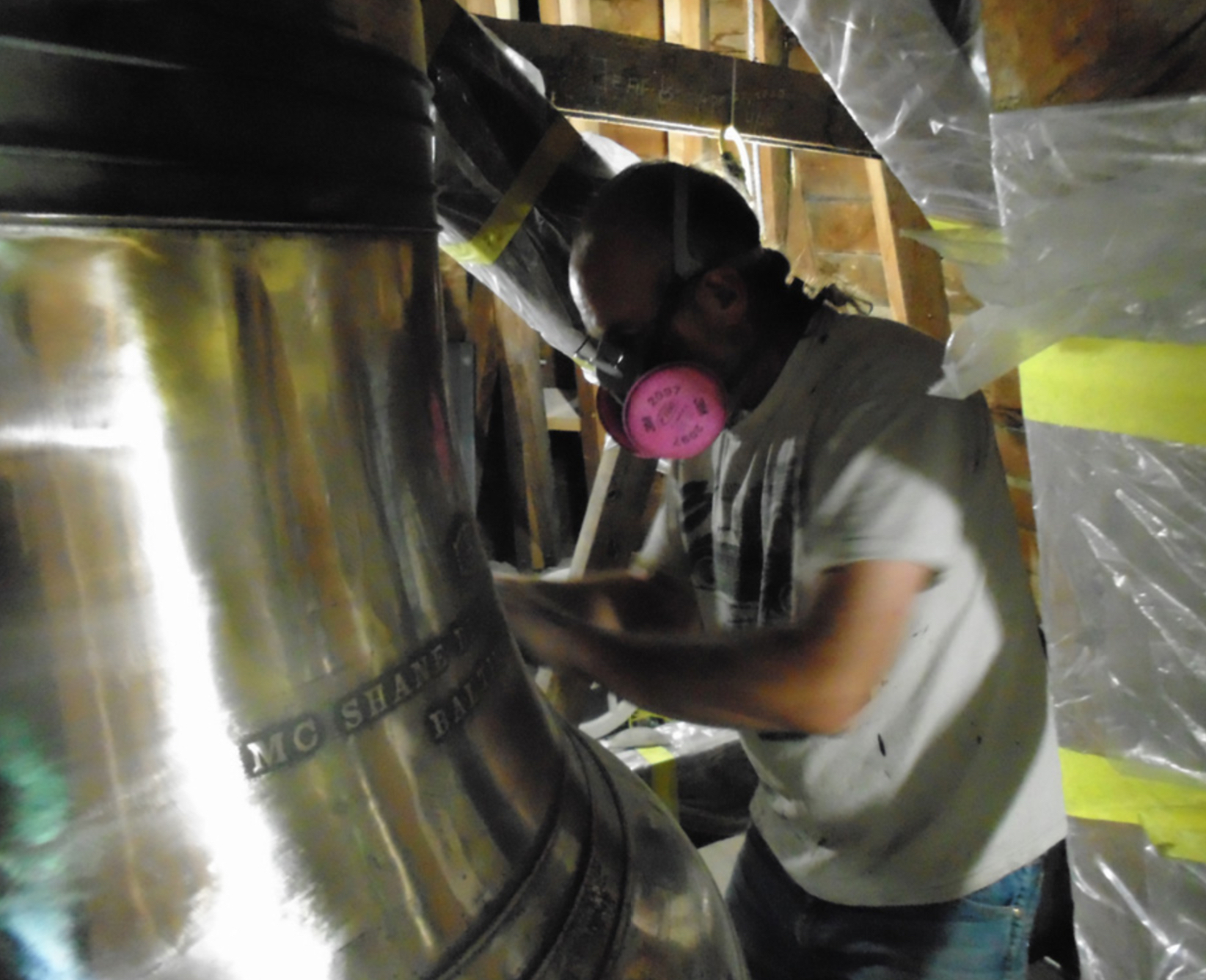 The finishing touches are being put on Calgary’s historic city hall, and few elements shine brighter than the 110-year-old, 1,500 pound bell in the clock tower.

As a part of a projected $34 million renovation, approved in 2014, the tower bell needed to be refurbished. The bell was a part of the city hall construction from 1911.

Calgarian David Clayton of Personal Touch Car Care answered the call to bring lustre back to the historic bell.

Born and raised in Calgary, it was an opportunity that Clayton simply couldn’t miss.

He was recommended by a client who worked on the construction services company that was also contracted on the rehabilitation of the historic city hall. Clayton’s skillset on auto detailing fitted the job.

After seeing the condition of the bell, he realized that he needed Jason Sauinier of AAA Metal Snipers, a business partner of his who also specializes in metal polishing.

“I knew I needed Jason’s help with this. He was very, very integral in a successful job.”

Albeit a business partner, this would be the first time that Sauinier and Clayton would work together.

On May 15, Clayton and Sauinier did a test spot on the bell to get an idea of what kind of job they would be undertaking. A few days later, he gave a quote that won them the bid.

Clayton took the helm as the supervisor and he started the paperwork.

He filled out a Risk Assessment Analysis form which laid out the work procedures, hazards and mitigation. For instance, in the sanding procedure, there is the danger of inhaling fumes from the solvent material so the use of respirators is necessary.

The bell is situated in a confined space more than 100 feet up from the ground. Clayton suggested for it to be temporarily taken out.

However, the bell was not to be removed from the tower.

They had to go up there themselves.

On July 5, the refurbishing started.

The access to the pinnacle where the bell is placed was a little trickier due to the ongoing construction.

Clayton and Sauinier had to access a narrow stairwell to the building’s roof and enter the clock tower through the weight room of the clock. Then there’s another stairwell leading to the clock room itself.

Upon entering it, there are two more ladders; one that led to a platform and another that finally led to the room where the bell is placed.

“It’s not for the faint of heart,” Clayton said.

Their equipment and materials were put in 5-gallon pails that was then pulled up by rope.

The bell had to undergo three levels of sanding before being polished.

“What our goal was, was to get me sanding on the bell and then get Jason polishing on it. And then while he’s polishing, I’m on the other side of the bell sanding,” Clayton said.

It was a rough environment. Clayton and Sauinier had to crawl under and hop over timbers that has been holding the place together since 1910.

The exhaust fans got rid of the dust but it caused noise and a lot of air flow. Clayton and Sauinier had to communicate by yelling.

On the first day, the sanding was completed with some polish. On the next, the final day, the polishing was done. The underside of the bell was sanded and polished as well.

The bell is once again back to its shiny appearance, with its manufacturing imperfections intentionally left as its birthmarks.

“It turned out beautiful. You can comb your hair in the bell,” Clayton said.

A historical tour while at work

Prior to the refurbishing, Clayton and Sauinier had to do a test spot on the bell to give an idea on what the bell would look like once it’s done.

Afterward, they were given a quick tour of historic city hall in its state at the time.

Through the scaffoldings that were still in place, they witnessed firsthand how the rehabilitation was being done from the sandstone relief to the roof placement.

They also saw the carvings of leaves and branches in finer detail, something that simply cannot be observed on the ground level.

During the job, Clayton saw approximately 20 different signatures scattered in the room. It was from individuals who did various maintenance in the clock tower over the years.

Now, two new names on a plaque were placed on a timber on the upper portion of the bell – David Clayton of Personal Touch Car Care and Jason Sauinier of AAA Metal Snipers.

“It was so cool. Knowing that you’re one of a handful of people that have ever been up in that pinnacle,” Clayton said.