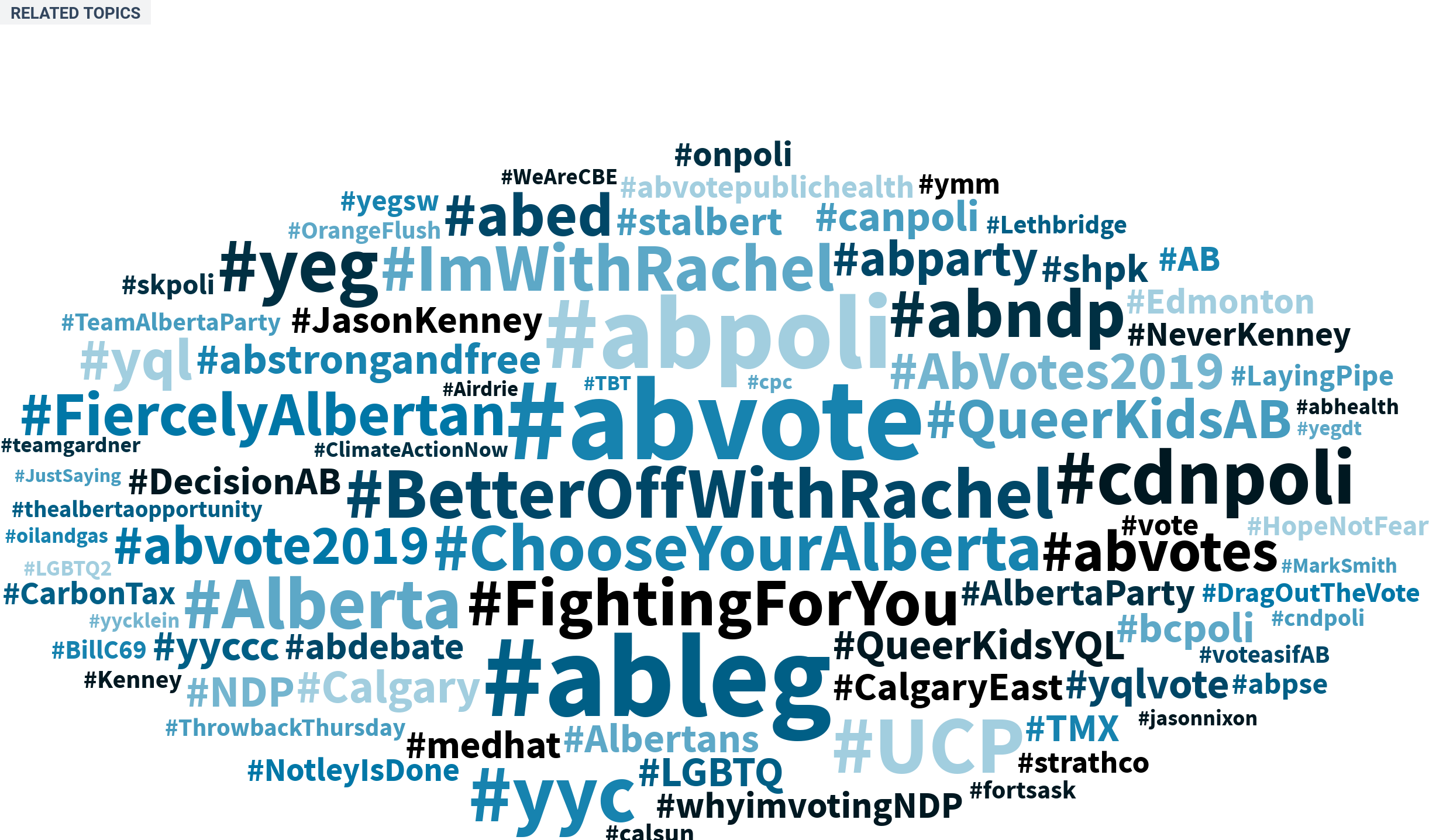 Is Twitter really a “left-wing echo chamber”, as United Conservative Party (UCP) leader Jason Kenney claims, or can we actually learn something about Tuesday’s provincial election by studying what people are saying on it?

It’s a topic that has been the subject of much academic study. Some researchers have claimed that Twitter sentiment – whether people tweet about candidates positively or negatively – can predict elections as good as, or better than polls. Others caution that the sample sizes are inherently limited and difficult to read.

For starters, LiveWire Calgary wanted to find out the tone of conversation, and what the hottest topics were online for the final two weeks of the campaign.

Bear in mind that the tool we used is very basic, and nowhere near as sophisticated as an academic’s. Nonetheless, it may give a basic picture, and something to think about.

We used Talkwalker’s Free Social Search to take a look at the #abvote hashtag, and others associated with it, for the weeks of March 30-April 5 and April 6-April 12. (Free Twitter analysis can only scrape the past seven days of tweets.)

analysis of the tweets echoes a frequent comment on this election: That it’s extremely negative.

It’s a campaign that ThinkHQ president Marc Henry said “is one of the nastiest ones I can recall,” in his most recent poll release showing the UCP still with a substantial lead and the only positive momentum was for the Alberta Party.

University of Calgary political scientist Anthony Sayers said, though, that this election “is not particularly negative, except perhaps to the degree the NDP has personally targeted Kenney and some UCP candidates by searching through their social media accounts, etc. looking for trash.”

Sayers cautions against jumping to conclusions based on Twitter.

“Interpreting Twitter is a ‘mug’s game’ because it’s so hard to know if you have an objective sample,” said Sayers.

“We each see a limited set of tweets, usually from people we like or who are likely to think like us. So our personal experience is not really much help in terms of understanding the universe of tweets. The ‘objective’ universe.”

Although not everyone lists their birthday on Twitter, Talkwalker’s analysis of the #abvote hashtag suggests that Twitter usage skews young.

However, the public data also shows that most of those using the UCP hashtag #abstrongandfree are in that 25-34 age range, while the NDP and Alberta Party tags are younger and older, respectively.

Unsurprisingly, most of the anti-UCP hashtags coincided with a dominant story in week three: the unearthing of a homophobic sermon by UCP candidate Mark Smith.

Both the NDP and UCP had more negative sentiment than positive through the two-week sample. However, the Alberta Party saw a noticeable uptick in positive sentiment, which was matched by feelings toward leader Stephen Mandel.

This is consistent with findings that the Alberta Party was the most-Googled party during and after the leadership debate on April 4.

Many of these hashtags were spread by verified politician and party accounts. Mount Royal University business and communications professor Peter Ryan says that both parties spend the same amount of money on social media campaigns.

Ryan recently contributed a chapter on this topic to the University of Calgary-published book, Orange Chinook: Politics in the New Alberta.﻿

“ groups like that, from across the spectrum, and that’s completely new in this provincial election,” said Ryan.

This could include bots intended to either inflame political or to make policies appear to have more support than they actually do.

A recent report commissioned by the Alberta Federation of Labour found that in a five-week period from February to March, nearly one-third of Alberta political tweets were by either bots or humans amplified by bots.

But can sentiment predict the election? Does the heavy volume of anti-UCP and pro-NDP tweets suggest that the polls predicting a UCP landslide may be wrong?

Ryan notes that the bulk of social-media activity is in the big cities of Calgary and Edmonton, where the election will be decided.

“It’s definitely scalable at the highest levels. And in fact, what we see right now is that in the cities, social media definitely can be telling about the issues.”

For what it’s worth, here is Talkwalker’s analysis of four keywords stressed in each campaign: pipelines, the economy, and the UCP’s “bozo eruptions.” The data includes the Mark Smith scandal and Kenney’s controversial interview with radio host Charles Adler.

No matter how one interprets the available data, the social-media correlation to the outcome of the past three Alberta elections is mixed, notes Ryan.

In 2015, he writes in Orange Chinook, the NDP created a strong digital campaign that built on previous innovative campaigns by Calgary mayor Naheed Nenshi and Edmonton mayor Don Iveson.

But in 2012, social media sentiment along with polling predicted a Wildrose Party victory, but the Progressive Conservatives (PCs) lived another day.

In 2008, sentiment suggested that the Alberta Liberals under Kevin Taft might make gains in Calgary. But historically low turnout (40.59 per cent) led to another PC landslide, and the Liberals losing seven seats.

A sentiment analysis of tweets during the 2015 Canadian federal election showed that Stephen Harper drew a majority of negative tweets, while Justin Trudeau drew mostly positive tweets, fighting his way to victory after being third in the polls at the start of the campaign.

Sayers emphasizes that whoever is elected Alberta’s premier on Tuesday, it will take quite some time to find out the meaning behind the political hashtags.

“Only deep and time-consuming research that will provide answers, and then, long after the election has passed,” said Sayers.