Calgary-East MLA Robyn Luff has been kicked out of the NDP caucus for refusing to sit in the legislature, but now the politician is releasing one of the statements she claims the government tried to censor.

The Calgary MLA made headlines Monday after putting out a press release saying she would no longer sit in the legislature until the NDP had addressed concerns about alleged harassment and bullying in the workplace.

Late Monday night, the caucus voted her out, meaning she will now sit as an independent. Luff also told the media Tuesday she will not seek re-election.

One of Luff’s complaints about the government was that she allegedly was not allowed to deliver a member’s statement in the legislature.

Luff’s office provided LiveWire with a copy of that that members’ statement, as well as a screenshot of an email with suggested edits, which can be found at the end of Luff’s statement.

LiveWire has asked the provincial government to verify the email screenshot was sent to Luff. They did not respond to requests for confirmation.

I spend a lot of time in this house thinking.

Thinking about whether this house, and our system of government is serving democracy and the people of Alberta the best way that it can.

Many of my colleagues tell me they feel this is a toxic work environment. In no other workplace is it acceptable to yell at someone while they are speaking.

We are physically positioned opposite each other, two sword lengths apart, the assumption under the colonialist and patriarchal roots of this place that members on opposite sides are at risk of stabbing each other.

While we are more diverse and gender balanced than ever before, this place is still predominantly white and male.

Why would anyone who watches us regularly in this work environment want to be part of it?

We don’t run hospitals the way we did 200 years ago, Mr. Speaker, and so why do we continue to run our democracy the same way?

I think about what would make it better. These are not things that will change overnight, they will take time – but I think these are conversations we need to have with Albertans.

I think leveraging technology to make policies and input more accessible to citizens would help.

I think education curriculum that reflects the reality and complexity of government and our party system and encourages students to think about what the best way to run a province is would help.

I think more independent, fact based journalism would help.  The rise of the opinion journalist and social media has done nothing to help focus political discourse on the actual issues at hand.

I think more attempts on the part of the media to understand that MLA’s are individuals, and are elected to individually represent their ridings, their constituents, and their beliefs- would help.

I’ve been doorknocking in East Calgary since 2012.  People regularly tell me they don’t trust politicians, that they are all the same, and that change won’t make a difference.  This is demonstrated by the fact that my riding has consistently one of the lowest voter turnouts in Alberta. Average voter turnout in Alberta is only 52%. I tell people this, and I also tell them I am passionate about changing that statistic.

I know that action from citizens does make a difference.  Engaged citizens result in better policy and accountable government. So I ask Albertans- what would it take to get you more involved in democracy?

These are big conversations. But after two years in this place I am incredibly certain that they need to be had.

Suggested edits on the above statement: 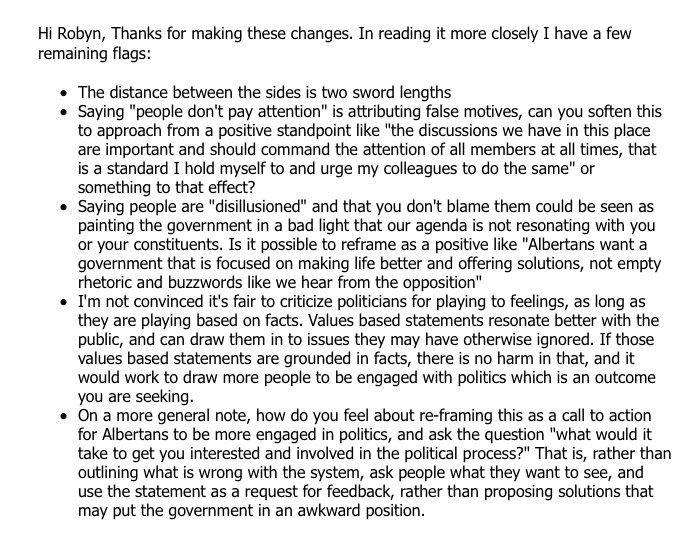