While one Calgary city councillor says it has taken hundreds of “exhausted” staff to get ready for a potential Olympic bid and the associated plebiscite, city administration says this just isn’t the case.

In a tweet, Coun. Druh Farrell – who has been against the idea of Calgary hosting the 2026 Olympic from the start – asked how city staff can pursue a bid in the midst of an austerity budget.

“(W)e’ve had hundreds of exhausted staff working on this bid. What are the opportunity costs?” asked Farrell.

When asked to elaborate on these problems, the Ward 7 councillor said that she and other councillors were told that a “significant” amount of staff time has been invested in the bid work.

“Council has not been made aware of specific projects that have been directly affected, but they have been told that staff is exhausted,” she said. “We know that there are cuts to the current budget—if you have many staff working on this file, how are cuts being rationalized while also considering a massive investment at the same time?” 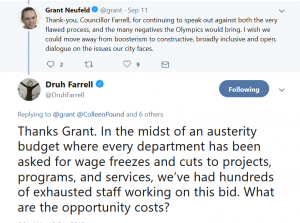 However, when LiveWire put that question to the city, a spokesperson said in a written statement that a team of 11 staff with the city secretariat are handling most of the work.

The secretariat was established to support the Olympic assessment committee.

“The secretariat staff consult with city staff (…) in order to complete their due diligence work of determining the risks and benefits of a potential 2026 Olympic and Paralympic Winter Games for The City and citizens,” read the statement. “This work has not delayed other city projects.”

According to the city, various staff outside of the secretariat are called upon for their expertise in eight “streams” of work on the bid, such as legal, finance, or risk management.

“We do not typically track these types of cross-department inquiries as they can often be resolved within a few hours,” read a statement from the city.

The spokesperson explained in an email that if more time is required, staff make arrangements with their supervisor to build the project into their portfolio or to work on a specific project for a set amount of time.

Calgary Housing and Transit each had one staff work full time on bid preparation for “a couple of months,” while the law department had two people working full time for about two months during the due diligence review.

“Finance’s Treasury group took on pieces of the financial review for differing lengths of time,” read the statement.”

The spokesperson also said that the city secretariat budget was developed to cover extra staff brought over from other departments.

Coun. Jeromy Farkas – another critic of the potential Olympic bid – said he’s been led to believe that a tremendous amount of staff resources have been put on the bid, although he’s in no position to quantify that number.

“There’s only so much capacity within administration,” said Farkas.

“When we think of the legal analysis, the financial analysis – there’s a lot of work going into this.

“That’s not coming from nowhere.”