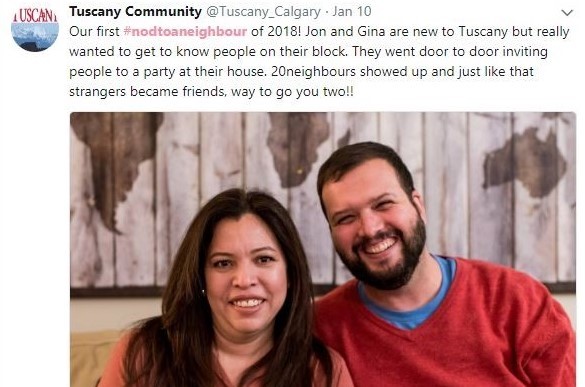 Living in the northwest Calgary community of Tuscany can become a route to small-town social media fame through the “Nod to a Neighbour” campaign started by the Tuscany Community Association (TCA).

Every six to eight weeks TCA posts about neighbours making a difference in the community using the hashtag #nodtoaneighbour. The campaign began in November 2017 with roughly six nominations on the TCA social media channels, including Facebook and Twitter. The nominees receive a small token of appreciation, which is usually a $25 gift card to a local business.

Jon Neufeld, president of the TCA, said the idea was pitched by Erik McRitchie, a board member with TCA, because they noticed a negative online tone in the community and wanted to change it.

“One of our directors said, ‘Hey wouldn’t it be great if we could change the online tone in the community and start recognizing people for all the good things that they’re doing,'”said Neufeld.

McRitchie thought of the hashtag #nodtoaneighbour for the campaign and the response from the residents has been positive and slowly increasing. The posts on social media receive great feedback with lots of likes, shares and supportive comments. 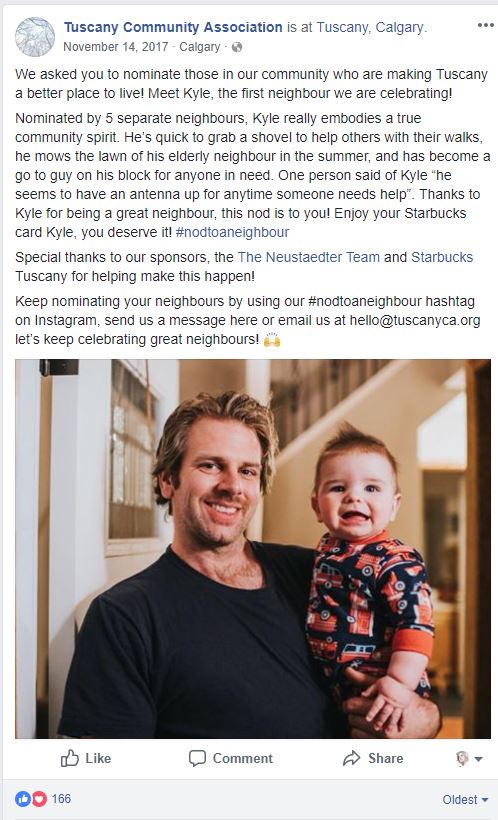 “It’s positive engagement and it’s the kind of thing that really is changing the tone on the internet for us,” Neufeld says.

The campaign has encouraged residents to make a difference in the lives of their neighbours, and to also be on the lookout for those who deserve a nod.

“I hope that we continue to get lots of nominations in and I hope that it can just grow from Tuscany out into other communities.”

The Tuscany Community Association has shown residents that their small acts of kindness do not go unnoticed and that the community association is working for them. They’ve increased community engagement with a simple hashtag— #nodtoaneighbour.