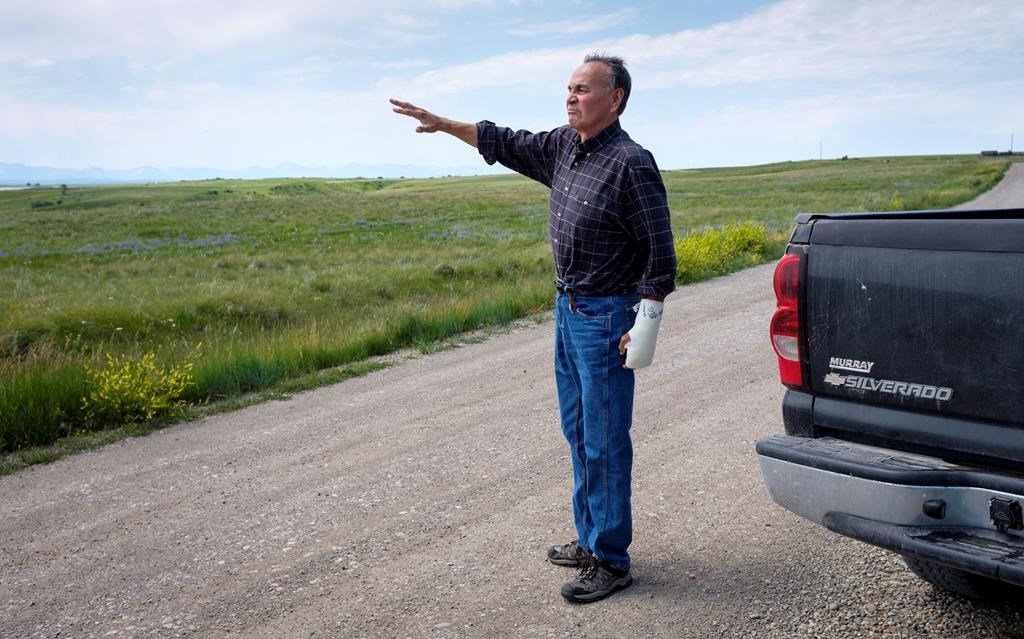 STANDOFF, Alta. — A dispute between two families over land on Canada’s largest reserve is heading to court in part to question whether First Nations members have any right to the ground beneath their feet.

“Do Indians have property rights? That’s what we need to know,” former Blood Tribe chief Harley Frank says of his decision to take his battle to the Federal Court of Canada.

The former chief of the Blood Tribe says he has already been in a physical fight over the land on southwestern Alberta’s sprawling Blood Indian Reserve, which is home to 12,500 people.

Frank, 68, still had bruising around his eyes when he was interviewed recently at his home on the reserve’s edge, 250 kilometres southeast of Calgary. His broken left hand was in a cast.

“They said, ‘We’re going to kill you.’ If my son Ken hadn’t come, I’d be dead,” Frank said. “They would have stomped me to death. They had chains, sticks, tire irons.”

The dispute involves 600 hectares of prime agricultural land allocated to the Frank family in 1960. Although band members can’t own property outright, they can have it allocated to them with the approval of the chief and council.

Frank’s father, Wilton, staked a claim and had two years to make improvements on the undeveloped property near the St. Mary Reservoir.

“He started fencing, got a house, planted trees — just like homesteading,” said Harley Frank, who was chief in 1992 and who more recently has been a band council member.

“The council approved this claim and gave him a fairly good chunk of land and put his name on the land register.”

Earlier this year, he said, he was informed that the band’s land dispute panel had awarded all but two hectares of the Frank property to a family with adjacent land. Frank said the decision was based on the evidence of a hand-drawn map and was approved by the chief and council.

His request for an appeal was rejected, he said.

The situation came to a head last month. Frank said he saw a farmer cutting hay on the disputed property. When he asked him to stop, the farmer called the new owners who showed up minutes later.

“They came after me. I was still in the field then and I saw them coming. I called my two boys for backup,” Frank said.

“I got beat up. I got a broken hand. We got our licks in, too, and that’s where it is right now.”

The Blood Tribe’s police chief, Kyle Melting Tallow, said the fight was under investigation, so he couldn’t provide any information.

Alberta Justice has no record of any charges being laid.

Members of the other family did not respond to a request for comment.

Frank’s younger brother arrived at the home shortly after the fight.

“He had blood running out of his eyes,” Bob Frank said.

“They’re taking our life away. That’s what they’re doing. All our history and memories.”

Harley Frank wants a temporary injunction to prevent anyone from taking grain or hay off the property and is asking the court to quash the land transfer.

“I will not give up one single acre.”

Malcolm Lavoie, an assistant law professor at the University of Alberta, said a customary interest in reserve land is granted by a band council or recognized by custom.

“In principle, a band council can reallocate customary interests. They are not vested property rights enforceable in courts outside of the First Nation,” Lavoie said.

“When some … criticize the relatively weak protection for individual property rights on reserve, one of the aspects they have in mind is the weak legal protection for customary interests.”

The court application names the other family, the Blood Tribe chief and council and the federal government.

Band spokesman Rick Tailfeathers said it’s unfortunate the dispute has come to this.

“The tribe’s tried to settle it and (the Franks) haven’t accepted the settlement agreement,” Tailfeathers said.

“There’s other disputes that happened and the land dispute committee settled some of them. I think this is one of the few that has gone to court.”