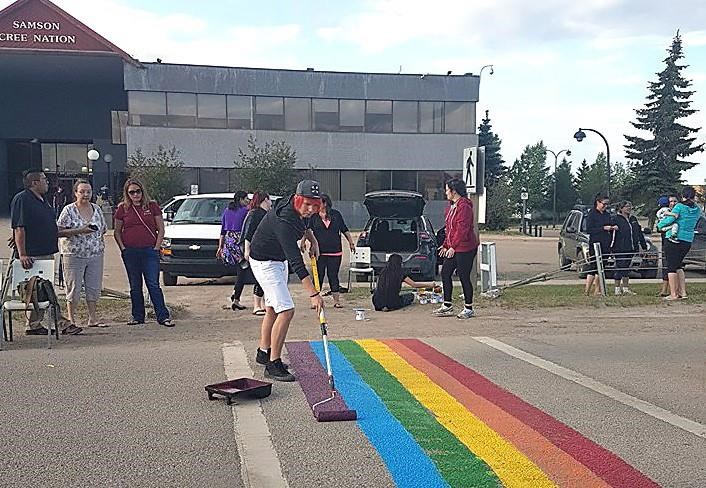 MASKWACIS, Alta. — A rainbow crosswalk in an Indigenous community south of Edmonton might be the first one on a First Nation reserve in Canada.

More than 15 volunteers painted the colourful crosswalk in front of the Samson Cree Nation administration building to celebrate Pride Month.

Chief Vernon Saddleback said he wants the community to be a safe haven for everyone regardless of sexual orientation.

“I have a niece who is gay. She just came out. It’s her first pride parade this year,” said Saddleback. “She has finally come out, I’m really happy for her.”

Chevi Rabbit, president of the two spirit committee, said the crosswalk is a milestone and represents the LGBTQ community in all four First Nations in the Maskwacis community.

Rabbit, a human rights activist who was recognized by Premier Rachel Notley in December, said there are many LGBTQ people who live a closeted life in Maskwacis.

“I would say we have a very high LGBTQ population – they’re really timid and shy,” she said.

Rabbit said she knows of at least 50 to 60 people who are LGBTQ or “two spirited” in Maskwacis, and believes there are more.

“The symbolism of having this crosswalk front and centre is signalling to the community that two spirit culture has arrived and we’re back and we’re here and we’re going to make ourselves heard,” said the 32-year-old.

Rabbit, who moved back to Maskwacis in December from Edmonton, was referring to celebrating the LGBTQ community – something that was common in the Aboriginal culture in the past.

Katherine Swampy, a Samson Cree Nation band councillor explained two spirited people were accepted and celebrated in the culture and were looked up with high regard.

“They were said to have two spirit – to be able to see through a male lens and a female lens and they had a spirit guiding them through life or watching over them,” said Swampy.

“And when the settlers came they were abolished.”

Rabbit said with the rainbow crosswalk, the hope is LGBTQ people in Maskwacis will feel included and welcome.

“It’s a way of showing people this is a safe zone. Its not something you have to worry about. Its an inclusive community.”