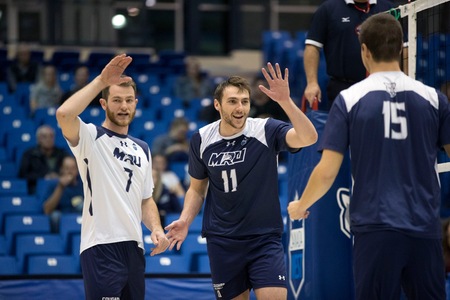 CALGARY – A win on home court, the Cougars take home a victory in the first home game of the season. The Mount Royal Cougars took on the Manitoba Bisons on Kenyon Court for the home opener.

The Booster Juice players of the game were Bisons Kevin Negus and Cougars Tanner Greves. Negus led his team in attacks with a total of 14, and the Cougars leading attacker was Tyler Schmidt with a total of 24. Bisons led in serve per cent 0.966 compared to the Cougars 0.810. The Cougars dominated the front row defense with a total of 19 team blocks. Cougars Luis Lang and Trent Mouter led the team with eight blocks each.

The Bisons gained an early lead in the first set leading 7-4. With both teams playing great defense, the boys had to work hard for every point. Cougars Tyler Schmidt took the team on a serving run and tied the game at 13. The Cougars stayed consistent serving and were the first to 16, taking the lead by one 16-15 at the technical timeout. After a kill from middle extended the Cougars lead by three the Bisons called a timeout 16-19. The timeout worked in their favour and the Bison’s regained the serve. Feeding the ball to Schmidt proved successful for the Cougars as he had kills from both the outside and right side, helping to extend the Cougars lead. The Cougars finish the set with a triple block for a final score of 25-19.

With fire under their belts the Bisons came out looking for a win. The second set started point-for-point, each team with hard attacks and strong hands at the net. A double block at the net from the Cougars gave them yet again the one-point lead entering the technical timeout 16-15. The second half of the set was no different and the teams continued to go back and forth. Cougars were the first to call a timeout when the set was tied at 20.

The Cougars regained the serve following the timeout with a kill from the right side from Schmidt. Quickly down by two the Bisons used their first timeout 20-22. Defense kept the Cougars in the lead, and the Bisons called their second timeout down 24-21. The Bisons stayed in the game when the Cougars missed their next serve. The Bisons fought back and the Cougars used their timeout when the set was tied at 24. The team’s fight didn’t stop there. Yet again the points went back and forth tied at 26. The Bisons were able to clinch the win 28-26.

Similar to the previous set the third started point-for-point. The Cougars eventually pulled away with a strong performance in the front row from Schmidt. The Bisons used their first timeout when they fell behind 8-12. The Cougars kept their momentum and continued to play strong offence, extending their lead 16-9 at the technical timeout. The Bisons struggled on defense, which allowed the Cougars to keep their lead. Finding a second wind Bisons Jack Mandryck took them on a serving streak attempting to close the gap. Ultimately the Bisons weren’t able to come back and the Cougars took the set 25-18, putting them up two sets to one.

Hoping to finish the match the Cougars came out swinging in the fourth set. The Bisons stepped up their defense and shut the Cougars down forcing them to call the first timeout of the set down 7-11. The timeout helped the Cougars to regain their rhythm and they quickly closed the gap getting hands on the Bisons attacks. The Bisons called their first timeout when their lead was shortened to only one point 11-10.

The Cougars reached 16 first, continuing the close fought game with a score of 16-15 at the technical timeout. A missed serve from the Cougars allowed the Bisons to pull ahead 19-16 and the Cougars called a timeout.  Powerhouse Schmidt pulled the Cougars back into the game when he hit the front row, the Bisons called a timeout up by one 22-21. A middle kill from Cougars Scott Gieske put them within one point of the match. The Cougars won the set 25-22 closing out the match in four sets.

Cougars Tanner Greves said, “with it being my fifth year I’m excited to get out and leave everything on the floor. We have a great group of guys, I’m looking forward to playing with them and for them this season. Tonight’s game didn’t go as well as we hoped, but tomorrow we are going to come back ready to fight.”

Looking for a clean sweep after tonight’s win the Cougars will play again tomorrow night, Oct. 20, 2018 at 7 p.m. Tune in to find out if they can keep a perfect record against the Bisons for home opening weekend.