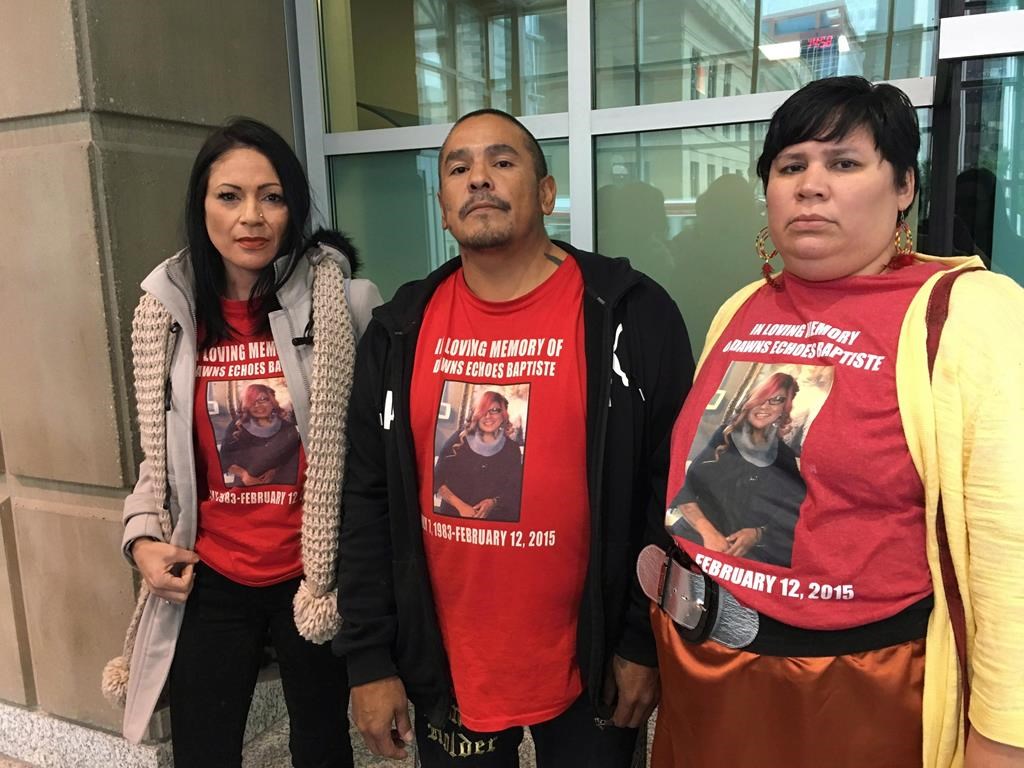 CALGARY — Loved ones of a Calgary woman who was raped and murdered in 2015 say they’ll never forgive her killer and the brutal nature of the crime has caused lasting harm.

Curtis Healy was found guilty of first-degree murder Friday in the death of Dawns Baptiste, a 31-year-old mother of four. He received an automatic life sentence with no chance of parole for 25 years.

The tall, lanky 29-year-old stood silently with his hands clasped in front while the sentence was read.

Alex Baptiste said outside court that Healy didn’t look at him as he spoke.

“He had no sign of remorse or anything. I don’t know how a person like that can live with themselves.”

“You showed absolutely no remorse or regret for what you did to her,” she said.

“She was loved and important to her friends and her family and her children, and your actions have robbed them forever of her love and support.”

Some relatives described getting sick, having to switch jobs and seeing relationships break down as a result of the ordeal that began 3 1/2 years ago.

A few described being afraid to ride on light-rail transit or suffering anxiety when passing by the northeast Calgary station Healy and Baptiste stopped at the night he killed her.

After Baptiste told Healy to leave her alone, he stomped her head, hit her with a bottle, dragged her into a back yard, raped her and struck her with a large rock. She was found a day later in the snow, facedown with her lower body exposed.

Cousin Louise Baptiste said she lost weight, fell into a depression, nearly had to quit her master’s degree and had to switch to a job where she didn’t have to take the C-Train.

She said the sentence won’t bring her cousin back.

“Dawns had a very kind heart. She was quiet, but she was always laughing every time she was with her kids.”

Her children are now between the ages of five and 13. The youngest was just a baby when Baptiste was killed.

Defence lawyer Shamsher Kothari said his client was surprised and shocked at the conviction and that there are numerous grounds on which to appeal.

He said those include a warrant that was not executed for a material witness, cognitive issues Healy had during the police interview in which he confessed and the fact that some jurors went for drinks at a hotel restaurant with TVs on and other patrons present while they were to have been sequestered.

“All of those issues combined obviously have to be taken to the Court of Appeal at some point.”

Cousin Verlyn Baptiste said the murder will always haunt her family, but they must pick up the pieces.

“He got what he deserved. He showed no mercy for her, so why should we show mercy for him?” she said after the sentencing.

“We can begin to heal now, but his pain is only beginning.”