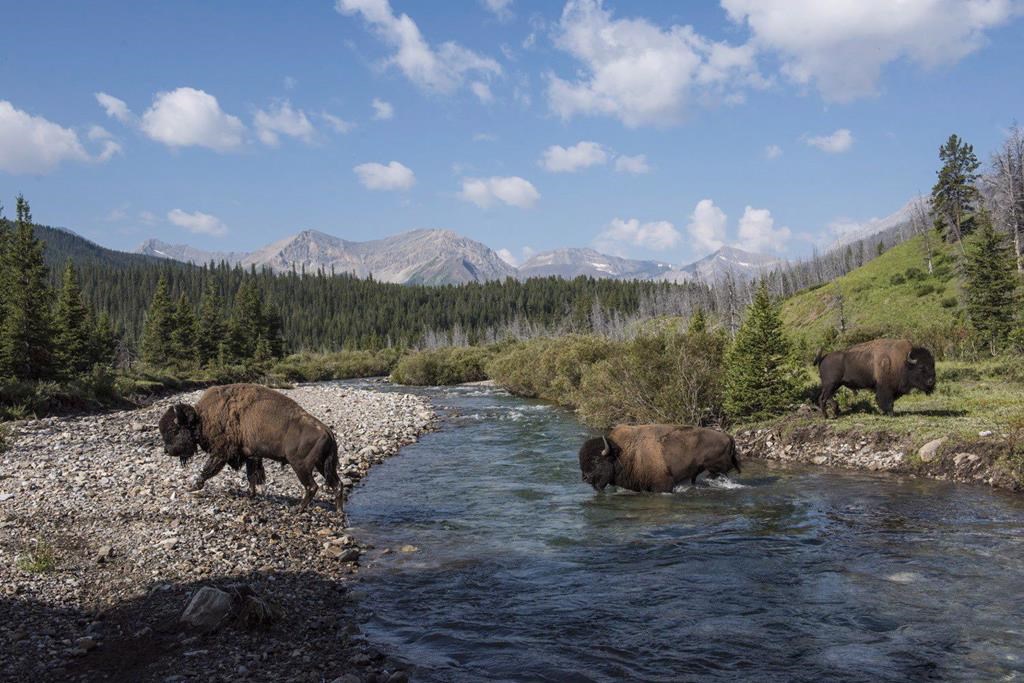 Officials said the bison left the 1,200-square-kilometre reintroduction zone separately last week and have been grazing on provincial land northeast of the national park.

“Safety is our No. 1 priority with this so we’ve made sure we’ve notified people in the nearby campgrounds.”

He said wildlife staff have visited two equestrian campgrounds in the area to help educate campers and riders on how to deal with bison.

Sixteen plains bison from Elk Island National Park were reintroduced as part of a $6.4-million plan in February 2017 into the remote Panther River Valley, about 40 kilometres north of Banff.

Ten of the females had calves last year and seven of those animals have now given birth again this year — including two on Aug. 5.

The two bulls, along with the other 31 bison in the herd, are being monitored both electronically and by staff on the ground.

Officials said they were prepared for the possibility the bison would roam and are working closely with the province and landowners in the area to guide the animals back to the park.

“We’d like to make sure they stay in the park as much as possible and we don’t want to run the risk of them encouraging other animals out,” said Hunt.

“We are making efforts to get them back westward but, right now, where they are is not problematic in terms of safety or coming into contact with livestock.

“They need to go and see what’s around and get a sense of where they are living and what’s available.”

Hunt said it’s possible the bison will start making their way back toward the rest of the herd once the breeding season — known as the rut — starts in the coming weeks.

Environment Minister Shannon Phillips has said she will protect the Banff herd with a special ministerial order, but it’s not yet in place.

“The process of drafting this order is underway, but was recently delayed by a fire in an Environment and Parks office building that displaced some staff working on this order,” she said in a statement. “We expect to sign this order before the end of the month.”

In the meantime, Phillips asked people who live, work or recreate near Banff National Park to let officials know if they see a bison on provincial land.

“We ask hunters to show restraint if and when they see bison on public lands,” said Phillips. “Bison are an important species to Albertans and Canadians, as such, I ask Albertans to help us ensure the success of the reintroduction to Banff National Park.”

If you see a wild bison, officials said it’s also important to give it space and back away slowly.

They said there’s four domestic bison at Ya Ha Tinda Ranch should riders want to familiarize their horses with the animal before heading into the backcountry.