From the playground to the podium: Calgary jump ropers have Olympic dreams 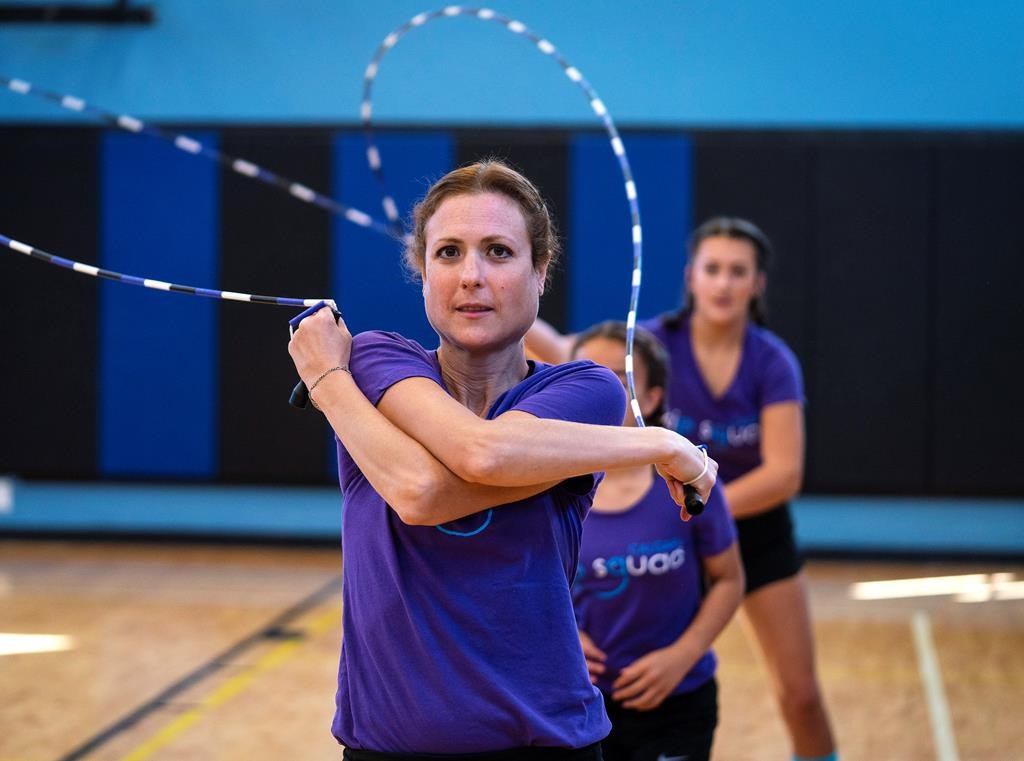 Now, try doing a handstand as double-Dutch ropes twirl around you.

And try doing that without getting tangled.

Competitive rope-skipping has been around in Canada for three decades, but it’s more often thought of as a children’s playground game than a bona fide sport.

Members of a newly formed team called the Calgary Skip Squad want to change that.

“People say it’s not a sport and stuff, but they don’t know actually how hard it is until they actually try it,” says Brooke Cornett, 13, who has been skipping for seven years.

“So I encourage them to go and join a team and try it. Then they’ll know actually how hard it is. We’re going to try to get it into the Olympics.”

Brooke’s teammate, 13-year-old Halle Borden adds: “If skipping was easy it would be in the Olympics, but it’s not.”

In some events, skippers must show they can turn the rope two or three times in one jump — a skill some athletes on the Calgary Skip Squad say was the hardest to master. Other events feature double-Dutch team relays and freestyle routines.

Brooke’s mom Amy Cornett, the president of the Calgary Skip Squad and a board member of Rope Skipping Alberta, says she wants the sport to be better known.

“Right now it’s word of mouth. We’re trying to do as many demos as we can at various sporting events, city events,” she said.  “We’re just trying to get our name out there or at least the recognition of the sport out there.”

The Skip Squad participated in the Calgary Stampede parade last month. It and other teams are often enlisted to provide entertainment at community events.

There has been a push to get the sport officially recognized by provincial and federal government agencies, which would open up funding sources.

Rope Skipping Canada chair Erin Gillespie says to that end, the organization has been working on getting a coach certification program in place, a requirement for official recognition. But it’s been slow-going for the volunteer-run organization.

“Rope Skipping Canada lacks the fundamental resources to promote the sport across the country, and so we’re really relying on clubs,” said Gillespie, who also coaches the Connectivity Skippers team in Leduc, Alta.

“But the clubs also don’t really have the resources to market and promote.”

On the international level, the two main rope-skipping organizations are planning to merge and concentrate their efforts on getting the sport into the Olympics, said Gillespie. The earliest she realistically sees skippers taking part in the Summer Games is 2028.

The Calgary Skip Squad has 15 competitive athletes, starting as young as 7 or 8. Head coach Carla Hill, who has been jumping rope for more than two decades, is in charge of leading the team through practices, choreographing routines and training.

“We work really hard as athletes and we train really hard and I think a lot of people who try rope skipping for the first time don’t realize how challenging it is and how much of a workout it is,” says Hill.

The club is open to anyone who wants to learn. Lessons start in September.

Many of the kids on the team were enticed to join when they saw older siblings take part.

“I saw my sister do it and was really interested and fascinated how much you can do with just a rope,” says Lily Beaudreau, 9.

“It’s a unique sport and once you get into it, you find it very interesting and fun.”