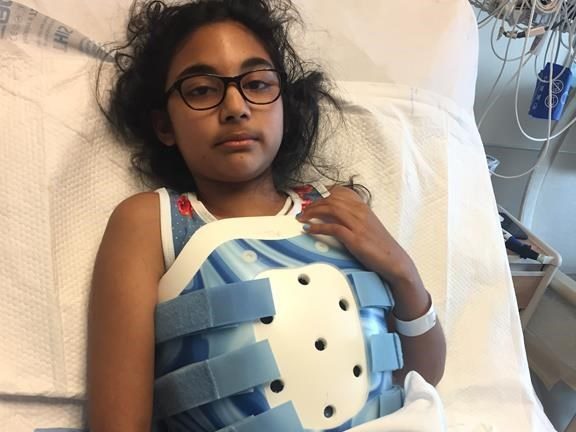 CALGARY — A girl who was gravely injured in a Texas highway crash last month that killed her brother, father and grandmother has returned home to Calgary, where she faces a long and difficult recovery.

Mehak Minhas, 10, was flown from Lubbock, Texas, to the Alberta Children’s Hospital on Wednesday. A spinal injury has left her unable to feel or move her legs, and she also fractured her left leg and right arm.

“We are definitely hoping for a good outcome. However, we were told by doctor’s team it is going to be a very long and challenging pathway to recovery. Her injury was quite significant,” said Gurpreet Singh, a close family friend.

Six members of the Minhas family were on a two-week vacation when their minivan and an 18-wheeler collided northwest of Amarillo early on July 14.

Mehak was airlifted to hospital in critical condition. Her eight-year-old sister Jupleen fractured her collarbone. Their mother Jasleen had broken ribs that punctured her lung cavity and suffered extensive bruising.

Singh, a pediatrician in Calgary, has been helping the surviving trio navigate their new day-to-day reality as they grieve their loved ones.

He said it’s too soon to say how much mobility Mehak may regain.

She has begun seeing a physiotherapist and occupational therapist, but intensive rehabilitation will have to wait until her broken limbs heal.

The younger daughter and mother have been discharged, but have been staying at the Alberta Children’s Hospital to be by Mehak’s side.

Family friends have set up a GoFundMe page to raise funds for the family.

Upinder Minhas, who worked as a consultant for software firm OpenText, was the primary earner and now the family will have to get by on the wife’s income. She is an account manager at Ricoh Canada Inc., and says her employer has been supportive and understanding.

Modifications to the family’s two-storey home may also be necessary so Mehak can get up and down the stairs.

Proceeds could also eventually go toward experimental therapies for Mehak, as well as toward Mehak and Jupleen’s education.

“Upinder came from a very humble background. He always emphasized good education and we want that for both of his daughters,” said Singh.

Singh became friends with Upinder and Jasleen Minhas shortly after he and his wife bought a house close to theirs in Calgary eight years ago.

“He was the friendliest person that I met when I came to Canada. He was like a brother to me,” said Singh, who came from India a decade ago.

The gravity of the situation has just begun to set in.

“Being back in Calgary brings back some memories which are not the easiest to deal with, memories of Mehar, and many reminders of the life that they had in the home that they are in now. It’s extremely challenging and overwhelming,” said Singh.

“It’s just unimaginable, the psychological trauma that has happened.”

Singh said he was touched by the kindness of Texans when a big group of loved ones travelled there from Calgary after the crash.

The Minhas family is Sikh, but there was no house of worship nearby to accommodate funeral services. So an area Hindu temple opened its doors for them to pray.

“It was a display of solidarity which was very exceptional.”

Jasleen Minhas said she is grateful the outpouring of support.

“I would just like to say thank you to everybody who’s supported us and are there with us at this time,” she said through tears. “It’s been a very unexpected turn in my life.”