“Something special about this boy:” Davies goes from refugee camp to soccer pitch 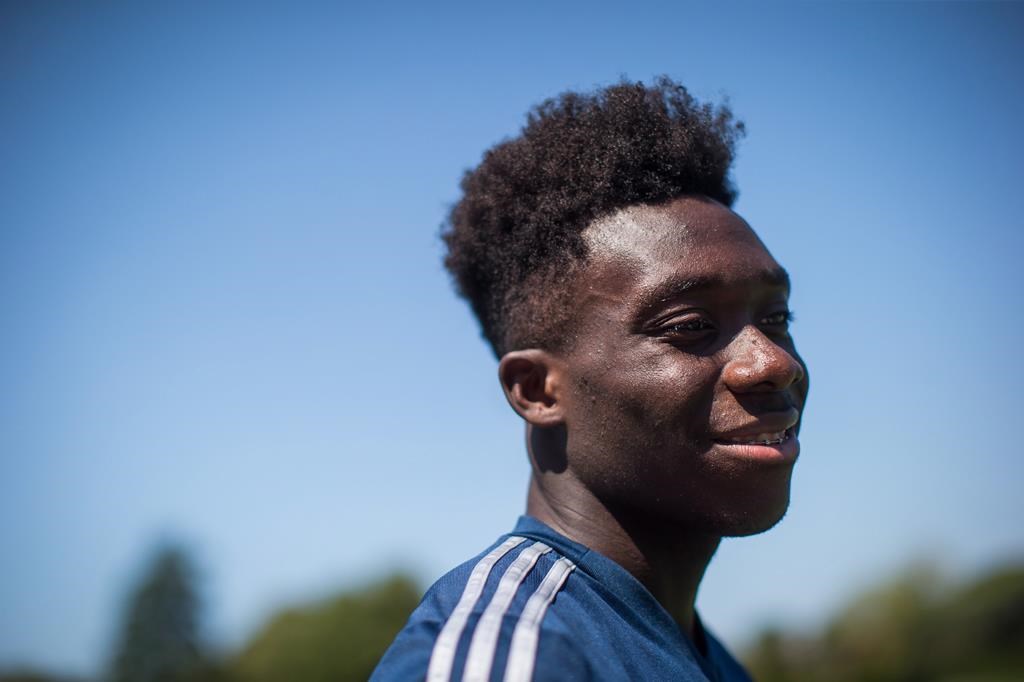 “Thank you, but I’m not done yet,” replies the 17-year old midfielder.

Huoseh, who now represents Davies as his agent, said the Edmonton-raised soccer star is driven to succeed.

Davies, who is set to play in the MLS all-star game in Atlanta this week, took another step closer toward his goal last week when the Whitecaps finalized his transfer to German soccer giant Bayern Munich for a record-breaking US$22 million transfer deal. He’ll start playing for the international team in 2019.

His journey so far has been one of resilience, humility and determination — with many helping hands along the way.

Davies was born in a refugee camp in Ghana on Nov. 2, 2000, after his parents fled the civil war in Liberia.

“It was hard, it was dangerous. It was hard to live there because the only way you survive sometimes is you have to carry guns too,” said his father, Debeah Davies, in a video made by the Whitecaps. “We didn’t have any interest in shooting guns. So, we decided to just escape from there.”

“Very scary,” added his mom, Victoria Davies. “You had to cross over bodies to go and find food. So the best way is to just get out.”

She said the refugee camp was safe, but there were no schools.

The Davies family was able to immigrate to Canada when Alphonso was five years old, eventually settling in Edmonton.

“He started school,” said his mom. “And now his life is improving. I thank God for that.”

Her focus has been to make sure her son gets his education — he told reporters in Vancouver last week that he’s hoping to finish high school before he heads overseas.

Davies, who became a Canadian citizen in June 2017, often thanks his parents for his success.

“They carried the family to a safe environment in Canada, a safe country,” he said in the Whitecaps video. “I am really happy they did that for us. Being Canadian is a great honour.”

Davies said Edmonton has been a major part of his life.

“Our little Alphonso,” she said. “He’s just one of those kids who had a permasmile on his face, always dancing in the hallways.”

The school, now called St. Theresa of Calcutta, joined Free Footie — a free after-school soccer league for inner-city kids in Grades 3, 4, 5 and 6 who can’t afford registration fees and equipment or get transportation to games.

Guzzo, who coached the program, said Davies played with their after-school program.

“He’s such a natural talent,” she said. “Anything he touched — track, basketball, any sport — he was the kid.”

Guzzo called Tim Adams, who founded Free Footie, before the year-end tournament and suggested he take a few minutes out of his day to watch Davies play.

“I saw Alphonso take one touch and I knew he had something special,” said Adams. “He had a gift.”

Adams had also called soccer coach Marco Bossio to check out the tournament.

“Marco was there and said, ‘Yes, we need this kid to come to our program,'” recalled Adams.

After the game, Bossio went up to the 11-year old and asked him about his plans for junior high.

“He said he was coming to the soccer academy at St. Nick’s,” said Bossio. “We were delighted and coached him for three years.”

Davies was also playing at the club level with the Edmonton Strikers.

During those years, both Huoseh and Bossio watched Davies develop as an amazing athlete.

“There’s no doubt that there’s a natural gift with Alphonso,” said Bossio. “What separates him from the rest is his willingness to work incredibly hard.”

They helped him navigate the next step with the Whitecaps.

Davies joined the team’s residency program in 2015 and since then has steadily worked his way up to the starting line up.

A lightning-quick player with astonishing ball control, Davies has five goals and 10 assists for Vancouver this season.

His former coaches agree Davies is not only a great story for Canadian soccer, but for Alberta and Edmonton.

“It’s great to showcase that soccer is alive and well in our city and in our country,” said Bossio. “A lot of times, people might think we’re only a hockey country or a hockey city, but there’s a lot of things that are happening.”

Davies’ success has also inspired the founder of Free Footie to take a year off with the hopes of developing the program in other Canadian cities.

“There is no doubt in my mind that there is an Alphonso Davies in every Canadian city and we can see that by the 2026 World Cup if we were aggressive in doing the right thing.”

— With files from Gemma Karstens-Smith in Vancouver.