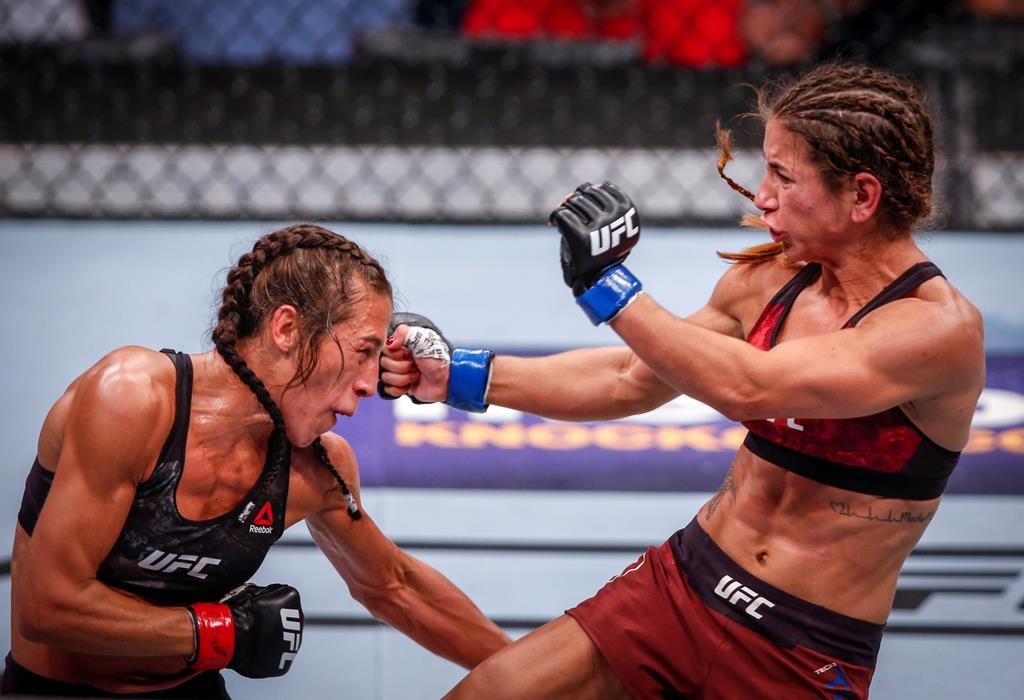 CALGARY — Dustin Poirier moved up in the queue to fight for the UFC’s lightweight title after beating former champ Eddie Alvarez on Saturday night.

Ranked No. 4 in the world behind Alvarez at No. 3 heading into UFC Fight Night, Poirier earned a technical knockout victory at 4:05 of the second round after bloodying Alvarez’s face with a flurry of punches.

The 29-year-old Poirier (24-5 and one no-contest) from Lafayette, La., expects a title fight. Undefeated belt holder Khabib Nurmagomedov (26-0-0) of Russia, however, seems more interested in Conor McGregor at the moment.

The Irishman entered a plea deal in New York this past week related to charges stemming from a backstage fracas in April.

Alvarez (29-6 and one no-contest) lost the lightweight title to McGregor in 2016.

Saturday’s bout with Poirier was a rematch of UFC 211, which ended in a no-contest when Alvarez illegally kneed Poirier in the head in Dallas.

Meanwhile, Brazilian veteran Jose Aldo made quick work of Jeremy Stephens in the co-main event, scoring a technical knockout in the first round over the American (28-15).

Aldo (27-4) has said he’ll retire when his current contract expires, but the 31-year-old wants to leave the cage a champ and re-claim the men’s featherweight title.

Coming off two straight losses to current champion Max Holloway, Aldo dropped to his knees in ecstasy and sobbed for joy after devastating Stephens with body shots.

Former women’s strawweight champ Joanna Jedrzejczyk of Poland defeated Tecia Torres of the U.S. in her first non-title fight since 2014.

Judges awarded Jedrzejczyk (15-2) a unanimous 30-27 decision over Torres (10-3). The Pole wants another shot at belt-holder Rose Namajunas after two straight losses to the American prior to Saturday’s victory.

The UFC returned to Calgary after a six-year absence and an underwhelming debut in 2012.

Just one of the 10 fighters billed for UFC 149’s main card stepped into the cage because of a slew of injuries. Some bouts drew jeers.

But Albertans winning the final two fights of Saturday’s undercard put Scotiabank Saddledome in a good mood for the main event.

In the undercard, Jordan Mein of Lethbridge, Alta., had predicted a two-minute win over Alex Morono. It took three rounds for the 28-year-old welterweight (31-12) to wear down the American (14-6) for a unanimous decision.

The Saddledome roared a greeting for hometown favourite Hakeem Dawodu and started chanting the featherweight’s name in the first round.

Russian lightweight Islam Makhachev (16-1) won by submission over Kajan Johnson of Burns Lake, B.C. (23-12-1) via an open armbar in the first round.

Ion Cutelaba of Moldova (14-3 and one no-contest) stopped Gadzhimurad Antigulov of Russia (20-5) in the first round for a technical knockout in the light heavyweight division.

American flyweight Dustin Ortiz (19-7) beat Brazil’s Matheus Nicolau (13-2-1) with a first-round knockout. Ortiz felled Nicolau with a kick to the jaw and finished him off with a series of hammer fists.

Women’s strawweight Nina Ansaroff of the U.S. (9-5) employed her leg power and accuracy to score a unanimous 29-28 decision over Randa Markos of Windsor, Ont., (8-6).

In the undercard opener, lightweight Devin Powell (9-3) of the U.S. blitzed Alvaro Herrera (9-6).

The American delivered a pair of punishing kicks to the Mexican’s midsection to end it less than two minutes into the opening round.