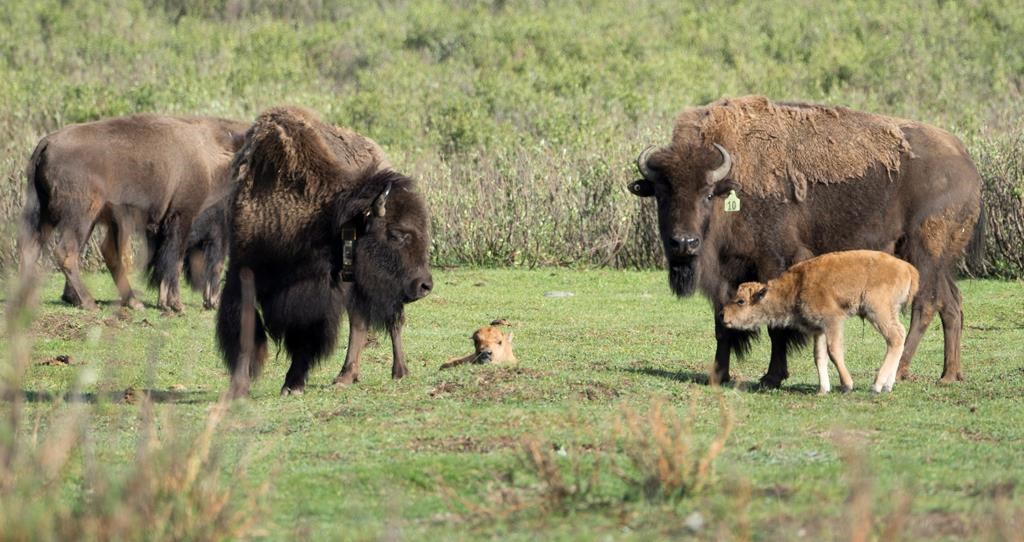 BANFF, Alta. — Three bison babies have been born in the backcountry of Banff National Park — the first calves conceived in the area in more than 140 years.

Two of the bison were born on July 15, while the third was born Thursday.

“They’re doing great, they are up and around and nursing, and doing really well,” said Bill Hunt, manager of resource conservation with Banff National Park. “If we’re really lucky, we’ll have six more born as well this year.

“These are the first made-in-Banff bison.”

It’s the latest milestone in Banff National Park after 16 plains bison from Elk Island National Park were reintroduced into the area in February 2017.

Six bulls and 10 pregnant females were transported in crates by truck and helicopter into a fenced pasture in the remote Panther River Valley, about 40 kilometres north of the town of Banff.

Each of the females had calves last spring, which are doing well, and brought the herd to 26 animals.

Nine of the 10 females were bred last fall and are expected to give birth a second time this year, but the calving season has been later than normal.

He said there’s a couple potential factors for the delay.

“One is that these (bison) were bred by very young bulls who had to learn what they were doing so things were spread out,” he said. “We didn’t see any breeding activity during the typical rut in August. It was later in the season.

“Secondly, it’s not uncommon for young females who are still caring for first-year calves to be not in great body shape in terms of being able to being bred again.”

Hunt said many of the female bison didn’t become receptive to breeding again until later in the year.

The bison herd, which could grow to 35 animals, will be released into a larger 1,200-square-kilometre reintroduction zone on the eastern slopes of the park in the coming weeks.

“We’re playing it by ear, watching water levels and where we are at with the calving,” said Hunt. “If a couple calves have just dropped, we don’t want to be releasing them that day.

“Water levels have come down nicely.”

There will still be short stretches of fencing to keep the bison from wandering out of the park.

— By Colette Derworiz in Edmonton