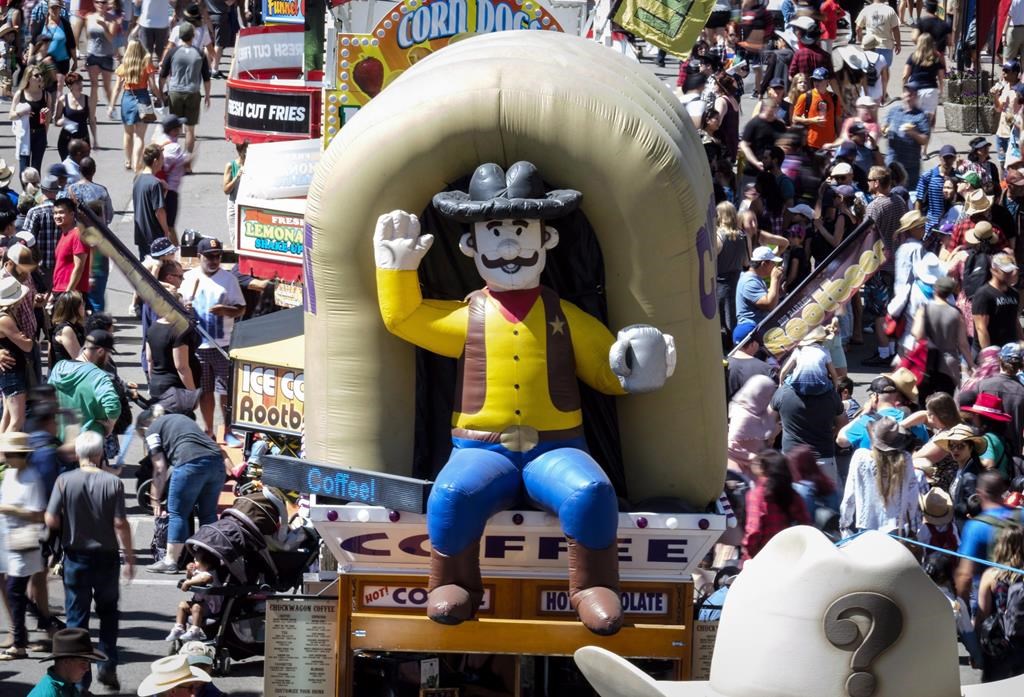 Calgary’s economy is looking good as Stampede spirit grips Canada’s oil and gas headquarters city — but not quite as good as it was a few years ago.

The annual outdoor event set an attendance record for its parade day last Friday and cumulative attendance through Tuesday is second only to the overall record set in 2012 when the Stampede celebrated its 100th anniversary.

Similarly, sponsorship rights to the 36 chuckwagons invited to race at the Stampede raised $3.2 million last March in an auction. That was much higher than the $2.4 million in 2017, but well behind 2012’s record high of just over $4 million.

Ben Gerwing, president of a cowboy boot manufacturer in Calgary that is celebrating its 40th anniversary, said that this year started out more promising than in the past couple years but it business has “tailed off” in recent weeks..

“I think there’s still a fair bit of uncertainty going on, even with more people going back to work,” Gerwing said.

He said Alberta Boot Co. sales are down about five per cent from 2017 but the company still hopes to sell about 1,500 sets of its $300-plus boots.

Better times in the economy have been touted frequently by Premier Rachel Notley and other members of the NDP government as they make frequent appearances at the 10-day event, which wraps up on Sunday. A provincial election is expected to be called next spring.

“There’s a great buzz around Calgary. People are very encouraged,” Notley said before marching in the parade last Friday.

“It’s been a great start to what we know is the greatest outdoor show on earth and I believe of course that was very much linked to Calgary’s economic recovery,” she told her cabinet in Calgary after her Stampede breakfast on Monday.

The statistics paint a picture of an economy still recovering from a recession that technically ended in 2016.

The June unemployment rate in Alberta was 6.5 per cent, a full percentage point better than in the same month last year, but not nearly as good as 4.6 per cent in June 2012.

U.S. natural gas closed at US$2.79 per mmBTU on Tuesday, down slightly from a year ago, but Canadian gas has averaged only C$1.60 so far this year thanks to an oversupply in Western Canada as U.S. shale gas production rises.

The parties are rocking, however. The “Best Damn Stampede Party” attracted about 5,600 people, about 1,000 more than last year, on the night before Stampede officially began last Friday, said organizer Rob Laidlaw. He said he expects about $170,000 from ticket sales to go to charity.

“People are just happier. We’ve been through some tough times but things are looking a bit better and they’re ready to go out and have some fun,” said Laidlaw, an investment adviser and vice-president with Acumen Capital Finance Partners.

“Stock prices in a lot of the energy companies have improving dramatically and, of course, the price of oil certainly helps.”

Stampede attendance is an indicator of the mood of the population — which is on an upswing — but it’s not a great proxy for the health of the local economy, said Trevor Tombe, an associate professor of economics at the University of Calgary.

“Calgary is where a disproportionate amount of economic pain is felt in the province, because of the types of job losses that occurred in oil and gas during the recession,” he said.

The province continued to post some of the best economic numbers in Canada even during the worst of the oil price recession of 2015 and 2016, he said, adding the economy remains strong relative to other provinces but “has some ways to go” to equal its strength in 2014.

The Stampede itself contributes an estimated $400 million per year to the economy, said spokeswoman Jennifer Booth. She said it adds about 4,000 temporary employees to its 300 full-time and 1,200 part-time permanent staff during the 10-day celebration.

Companies mentioned in this story: (TSX:CNQ)