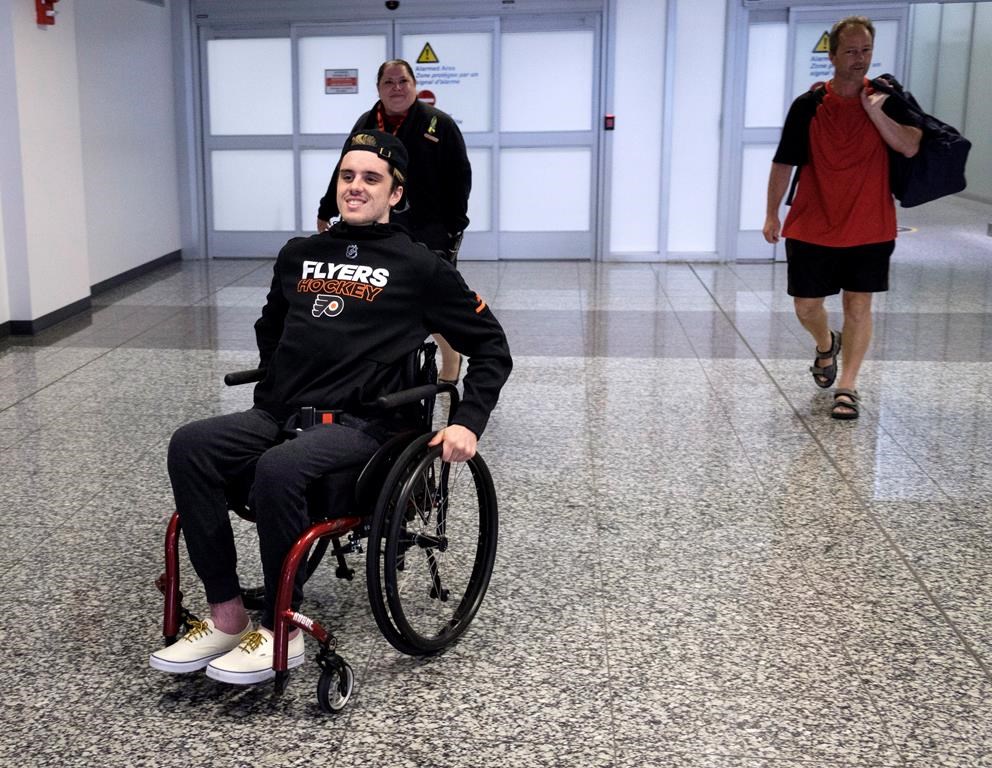 CALGARY — It has been more than five months since Ryan Straschnitzki was together with his family in his hometown of Airdrie, Alta.

Straschnitzki, 19, was paralyzed from the chest down April 6 in a collision of the bus carrying the Humboldt Broncos hockey team and a semi-trailer north of Tisdale, Sask. The crash killed 16 people and injured 13 others.

After a month of physiotherapy treatment at the Shriners hospital in Philadelphia he returned home Wednesday to a bank of TV cameras and journalists at the Calgary International Airport.

“It feels good. I was just dropping down on the plane looking at the view — it was nice. It brought back memories,” Straschnitzki said.

“I’m excited. It’s been a while since I’ve been here and seen my friends.”

Straschnitzki was accompanied by his parents, brothers and sister who spent the past week with him in Philadelphia. He hasn’t been in Airdrie with his family since earlier in the Saskatchewan Junior Hockey League season in February.

His mother, Michelle Straschnitzki, said it’s wonderful for the family to be back home together.

“It feels awesome. It feels like its been so long coming and we’re just going to take it one day at a time still but we’re enjoying it,” she said.

“We do it in shifts right? We’re on to the next period and we’ll see what happens.”

Ryan said he wants to visit with family and friends, take a few days to rest and then attend the Calgary Stampede.

“I’m going to take my girlfriend to the Stampede and have some fun but then continue physio after that,” he said.

His father, Tom Straschnitzki, said the next stage of Ryan’s recovery will be focused on him learning to do things on his own.

The first thing on the list is something he concentrated on in Philadelphia — learning how to slide from his wheelchair into a vehicle.

“We’re going to have a real car to do it tomorrow,” he said with a chuckle.

“I mentioned to him no more wheelchair accessible. You’re on your own. We’re going to do this.”

The family will be staying at a hotel in Airdrie, just north of Calgary, until renovations on their house to make life easier for Ryan are complete.

Ryan said he will be heading back to Philadelphia for a check-up in six months. For the time being he is a bit limited in what he can do.

“I feel a lot better, stronger,” he said.

“I’ve obviously got stronger upper body and gained some weight back but there are some restrictions on my back still so I have to wait for those restrictions to be off and then I can start doing more things.”