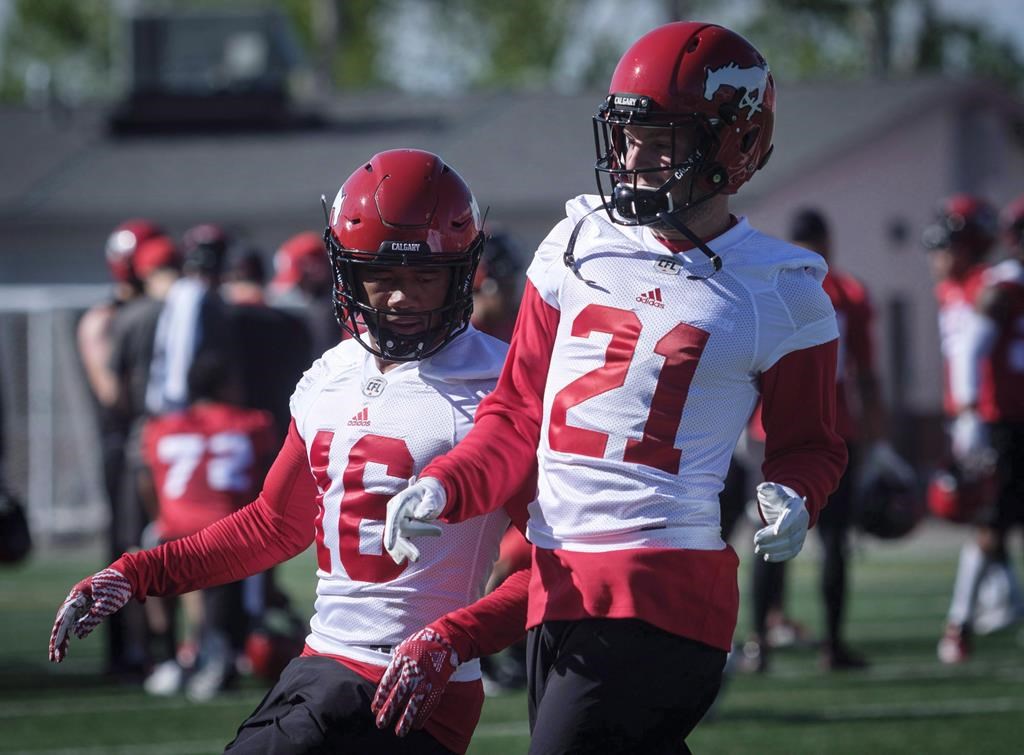 CALGARY — With both quarterbacks throwing a lot of passes to a lot of receivers just days ago, Thursday’s game between the Ottawa Redblacks and host Calgary Stampeders will be a stiff test of each team’s defence.

Both football clubs are coming off high-scoring wins.

“I know Calgary spreads the wealth a lot and we do the same thing,” Harris said Wednesday.

Former Redblack Adam Berger gets his first career start at safety as a Stampeder against his former team.

The 27-year-old from Vancouver has an idea of what’s coming having practised against Ottawa’s offence last season.

“Knowing the system a little bit hopefully will help out,” Berger said. “We saw last week how explosive their offence was. Saskatchewan’s defence is pretty good and they just lit them up.

“We know it’s going to be a challenge. We’ve got a good defence, they’ve got a good offence. Something’s got to give obviously, but I think we’re ready for it.”

The Simon Fraser product played mostly special teams for the Stampeders from 2014 to 2016, although he did start at corner and recorded three tackles in the 2015 Western final against Edmonton.

Berger signed with the Redblacks in 2017 and started a game at safety among his special-teams duties. Knowing the Stampeders could use a Canadian safety influenced his decision to re-sign with Calgary this year.

Berger got the nod to start because Tunde Adeleke was injured in practice Tuesday. He collided with the sideline advertising boards.

The Stampeders and Redblacks have waged pitched battles recently, including the 2016 Grey Cup in which Ottawa upset Calgary 39-33 in overtime.

“They always start out the year, in my opinion, super-fast because it seems like their offence is clicking and they’ve been running the same type of stuff,” Stampeder head coach Dave Dickenson said.

“I feel early in the year, they’re as tough a matchup as anybody.”

Calgary has a home-and-home, of sorts, against Ottawa as the Stampeders travel to the national capital after a bye next week.

The Redblacks face the Montreal Alouettes before they see Calgary again at home. The Redblacks have yet to beat Calgary at McMahon.

“If you’re going to beat a Calgary team especially in Calgary, you’ve got to make sure you come in with a great game plan,” Harris said. “You’ve got to execute it and not beat yourself.

“They really make you take the fight to them if you want to compete with them. If you don’t bring it, Calgary is going to hit you in the mouth.”

THE BO SHOW — Mitchell is 30 passing yards from a career 20,000 and would become the third Stampeder QB to surpass that milestone after Henry Burris (32,191) and Doug Flutie (20,551). He would also be the fourth player to achieve all his yardage with a single team after Sam Etcheverry (Montreal), Russ Jackson (Ottawa) and Warren Moon (Edmonton).

HARRIS’S HILL — Ottawa’s quarterback is looking for his first career win against the Stampeders (0-4-2).

LONG BALLS — Both quarterbacks are looking downfield early this season. Mitchell leads all pivots with 19 attempts of 20 yards or more while Harris went 4-for-4 for 143 yards against the Roughriders.

PAREDES PERFECT — Stampeder kicker Rene Paredes is 6-for-6 in field-goal attempts in 2018 with his longest from 42 yards.